Surrogate Mother of Triplets Sues Father Who Wanted One Aborted 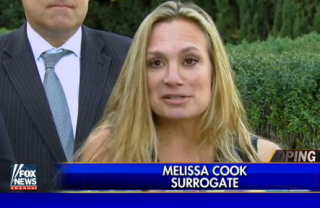 Melissa Cook agreed to be a surrogate, and was implanted with multiple embryos so that a man, known only as C.M., could be a father. The result was one legal issue after another. The two had made an arrangement through a surrogacy agency, and Cook ended up carrying triplets, (the egg was donated by an anonymous woman), according to The Atlantic.

When C.M. found out there were three fetuses, he demanded that Cook abort one of them. She claims he said he couldn’t afford three children, but his attorney, who also represented the agency, said he was concerned for everyone’s health, People Magazine reported. Cook refused, and said she was willing to adopt the third child. C.M. didn’t like the idea of giving up one of the three children for adoption. Cook sued, with the hopes of keeping the child that C.M. didn’t want, while also collecting her surrogacy fee. Technically, keeping the child would have violated her surrogacy agreement, which could have meant forfeiting the fee.

Cook ended up giving birth to three boys, who were immediately turned over to C.M., the legal father who was granted custody by a Los Angeles Court. Cook, who lives in California, sued again claiming that C.M., a single, 50-year-old deaf man who lives in Georgia with elderly parents, could not care for them. Cook is claiming that California’s surrogacy laws, which favor the intended parents, as specified in their surrogacy contracts, are unconstitutional, and do not act in the best interest of the children, which is the usual legal standard in custody cases.

A California court granted a temporary stay of the L.A, court’s ruling, forcing C.M. to keep the children in California until a new decision was reached. That stay was lifted on April 14, and now C.M. and the babies are back in Georgia.

At a press conference on Tuesday, Cook’s attorney Harold Cassidy stated that there will be a Georgia lawsuit that will aim for Cook to get access to the children and make sure they’re being properly cared for. C.M.’s attorney, Robert Walmsley, told People that the children are “doing fine.” Cassidy alleged that at one point Child Protective Services was called when C.M. had to bring the children to the hospital because he didn’t know how to feed them. Walmsley had told People that said that the hospital visit was for “reflux issues.” Cook said at the conference that to this day, she hasn’t even met C.M., even though she requested to do so. She also said that while she was pregnant, C.M. suggested  that Cook abort all three of the babies. “What kind of person says that?” Cook asked.

Cassidy said that while Cook had voluntarily entered into the surrogacy agreement, a woman who carries children cannot just say “what happens to these children is none of my business.” He argued, “of course it’s her business.” When Cook heard that C.M. was 50, single, deaf, and possibly unable to care for the triplets that was really the last straw.

“What kind of mother would Melissa be if she got that information and she says ‘Oh wait a minute, I have to honor a contract,'” the attorney said. The nature of the contract was essentially the sale of children and that in itself must be examined, he added.

Michael Caspino, another attorney for Cook, said that the courts thus far have ignored “what’s in the best interest of the children.” Cook said she would be willing to adopt all three triplets, but just wanted a court to make a decision about what was best for them.