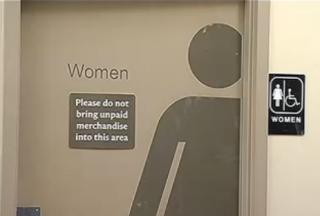 A guard at a Washington, D.C. supermarket was charged with simple assault for allegedly physically removing a transgender woman from a women’s restroom on Wednesday, Washington’s NBC4 reported. Ebony Belcher claimed that she went to the ladies’ room, passing a female security guard on her way. She said the guard followed her in, called her names, grabbed her by the arm, and pushed her out of the store. Belcher claimed she suffers from Parkinson’s disease and almost fell down during the confrontation.

Belcher told NBC that the guard told her, “You guys cannot keep coming in here and using our women’s restroom. They did not pass the law yet.” Once outside, Belcher called the police, who arrived and arrested the guard.

In a statement, Giant declined to comment on the alleged incident,  “[a]s this matter involves a third party that provides security services for Giant and there’s an ongoing criminal investigation.”