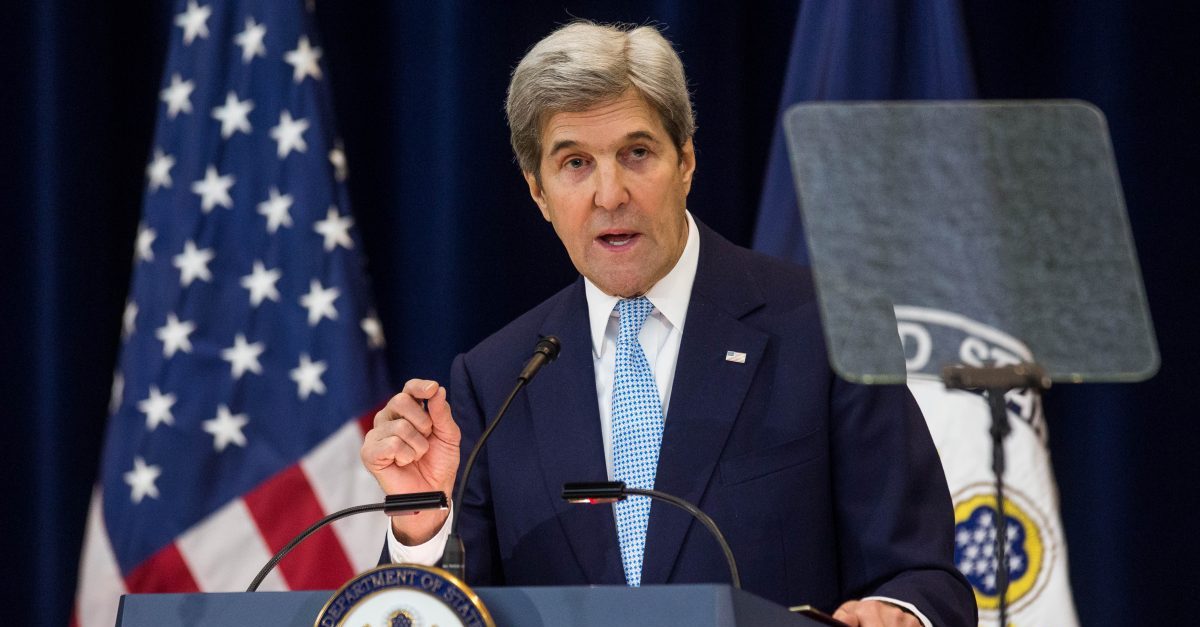 Senator Marco Rubio (R-Florida) wants the U.S. Department of Justice to look into whether John Kerry violated federal law when he held meetings–including with an Iranian official–regarding the Iran Nuclear Deal, when he was no longer Secretary of State. While in office, Kerry helped negotiate the deal, formally known as the Joint Comprehensive Plan of Action (JCPOA), which Rubio and President Donald Trump strongly opposed.

“Last week, former Secretary Kerry publicly admitted that he has met with Iranian foreign minister Javad Zarif ‘probably three or four times,’ including in the United States, since leaving office,” Rubio said in a letter to Attorney General Jeff Sessions on Tuesday. Rubio said this confirmed the May 4 Boston Globe report that said Kerry “sat down at the United Nations with Foreign Minister Javad Zarif to discuss ways of preserving” the Iran deal. Kerry also reportedly met with French, German, and European Union leaders about the JCPOA.

Rubio said in his letter that he wants the Justice Department to look into this and determine whether Kerry’s actions violated the Logan Act of 1799, which prohibits private citizens from unauthorized communications with foreign governments for the purpose of influencing “the measures or conduct of any foreign government or of any officer or agent thereof, in relation to any disputes or controversies with the United States, or to defeat the measures of the United States.”

There is no record of anyone ever being prosecuted under the Logan Act (except for an 1803 indictment that did not result in conviction), and the law has been criticized for being too vague. Of course, the law is still on the books, and it’s possible that Kerry’s actions violated it.

Rubio quoted current Secretary of State Mike Pompeo, who said on Friday that Kerry’s meetings with the Iranian official were “unseemly and unprecedented.” Pompeo also said that while he wasn’t there, “I am reasonably confident that [Kerry] was not there in support of U.S. policy with respect to the Islamic Republic of Iran.”

Kerry is said to have told Iranian officials to “wait out this administration.” Rubio noted that Kerry did not deny saying this when asked about it.

In addition to the Logan Act, Rubio also suggests that Kerry could have violated the Foreign Agents Registration Act, which requires people to register with the Justice Department if they are acting as agents of foreign principals to lobby in the United States.

Kerry himself admitted last week that he had a “fairly long” conversation with Pompeo about the Iran deal before President Trump decided to back out of it. Rubio is implying that if Kerry’s goals were not in the United States’ interest but in favor of Iran, that could be a legal problem.

John Kerry had illegal meetings with the very hostile Iranian Regime, which can only serve to undercut our great work to the detriment of the American people. He told them to wait out the Trump Administration! Was he registered under the Foreign Agents Registration Act? BAD!

Kerry responded to that by saying Trump should be more concerned about Special Counsel Robert Mueller’s investigation, and that if he wanted to learn about the JCPOA, he can buy Kerry’s new book.

Mr. President, you should be more worried about Paul Manafort meeting with Robert Mueller than me meeting with Iran’s FM. But if you want to learn something about the nuclear agreement that made the world safer, buy my new book, Every Day Is Extra: https://t.co/DKjc33Kvvu https://t.co/cesltkt0zW

Rubio Letter to Sessions by on Scribd