Private Autopsy Results: Black Man Mistakenly Killed by Cops at Alabama Mall Was Shot from the Back 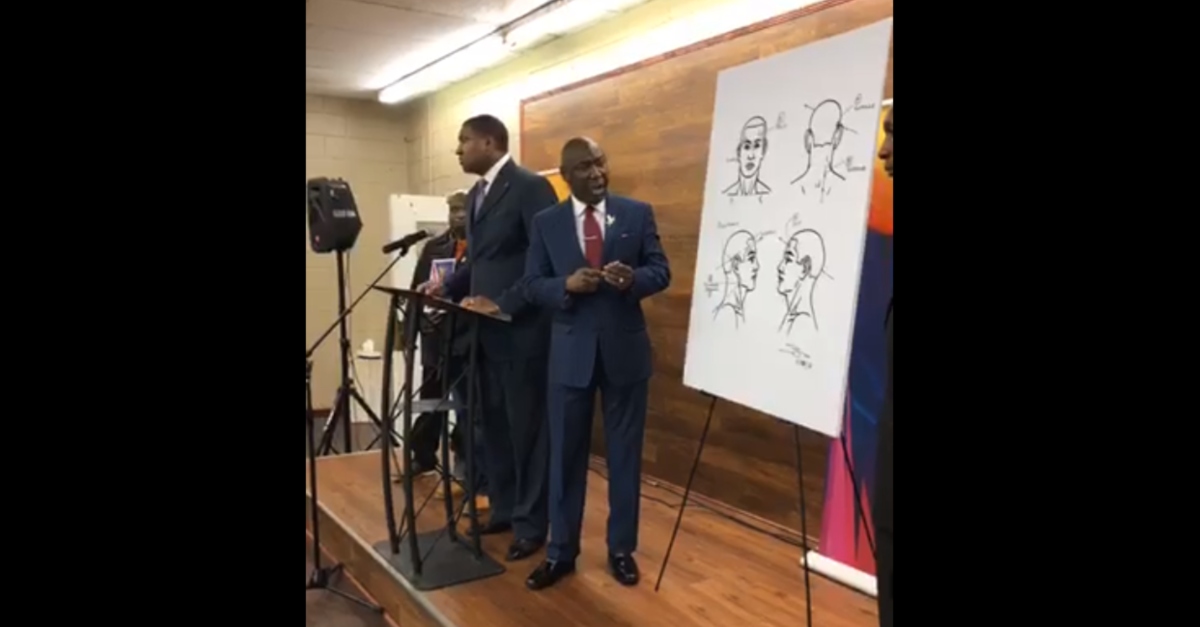 Police shot 21-year-old Emantic “E.J.” Fitzgerald Bradford three times from the back, according to the results of a private autopsy announced by his family’s lawyers.

This comes over a week after cops walked back their initial claim that the victim opened fire at a mall in Hoover, Alabama on Nov. 22. Investigators said Bradford shot and injured an 18-year-old man and a 12-year-old girl. That wasn’t true. Police later changed their story, and said there was a mistake. Bradford, who was at the scene and armed, probably did not hurt anyone, they said.

Bradford’s family hired a pathologist for an independent autopsy to determine how many times Bradford was shot and whether he was shot in the front or the back.

“New evidence now suggests that while Mr. Bradford may have been involved in some aspect of the altercation, he likely did not fire the rounds that injured the 18-year-old victim,” cops said in their update.

On Monday, attorney Ben Crump told reporters that bullets hit Bradford in the back, neck, and head.

Crump “all of thes shots are kill shots. We thought he was shot in face” that was wrong because face landed in pool of blood. pic.twitter.com/cuZ9q9XzBW

Crump said Bradford did not have a criminal record, and added that he was honorably discharged from the Army.

HE HAS A NAME:

Emantic “EJ” Fitzgerald Bradford Jr., a veteran of the Army and son of a cop, was shopping in a mall in Hoover, Alabama when there was a shooting. When police arrived they mistook him for the shooter and killed him.

May he rest in peace. pic.twitter.com/npMuPzuPMl

Cops won’t detail their narrative as to what happened. They passed the investigation to the Jefferson County Sheriff’s Office, who in turn gave it to the Alabama Law Enforcement Agency. On Monday, Hoover police chief Nick Derzis said the ALEA Secretary of Law Enforcement Hal Taylor asked that they not release evidence from the shooting. That includes video and audio of the incident.

“He has specifically asked that we do not release any potential evidence as it may not only jeopardize the integrity of the case, but also complicate or delay their efforts,” Derzis said in a statement obtained by Law&Crime.

Anthony Thomas Bradford Uncle “I’m here to tell you, you coward. You shot my nephew in the back. Heads have got to roll from the top to the bottom” pic.twitter.com/g4IR3Zk8XG

Authorities arrested Erron Brown, 20, and claimed he was the real shooter. The 18-year-old was described as Bradford’s friend. The 12-year-old girl was a bystander.

Note: After the press conference, Hoover city officials recommended that the private autopsy results be submitted to the ALEA so it could become part of the investigation.

“We couldn’t agree more with Attorney Crump’s call for a thorough and complete investigation and for witnesses to come forward to assist in the search for the truth,” according to a statement obtained by Law&Crime. “We also agree with his call to refrain from speculation until the investigation is completed. Our sympathies are with the Bradford family as they, the community, and the City of Hoover, await ALEA’s complete investigation.”