Policy Banning Gays From Donating Blood: Not Perfect, But Maybe Best We Can Do 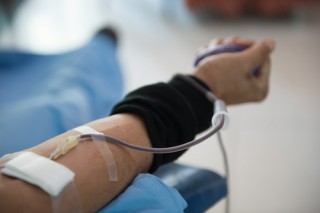 Following the mass shooting at a gay nightclub in Orlando, the FDA’s policy banning gay men from donating blood has come under scrutiny.

The FDA’s policy originated in 1992, under which any man who had had sex with any other man (even one time since 1977) was banned from donating blood for the entirety of his life. For decades, the complete ban on blood donation by men who have had sex with other men (generally referred to for these purposes as “MSMs”) has drawn criticism for being unnecessarily harsh and discriminatory. Gay men were included with other groups excluded from blood donation based on behavioral factors, such as intravenous drug use, participation in prostitution, or recently having had a tattoo or body-piercing. In 2015, the FDA modified its guidelines to reduce the lifetime ban to one prohibiting only donations by men who have been sexually active with other men within the preceding twelve months. So that includes just about all gay men.

LGBT Americans face massive discrimination in this country; but arguing that the FDA’s current policy on blood donation by MSMs is illegally discriminatory may be a counterproductive crying of wolf. The blood donation ban is a measure that directly affects public health and safety. Failure to acknowledge that fact is irresponsible and will erode credibility. According to the CDC, sexually-active gay men, who account for 2% of the population, are statistically more likely than any other group to be affected by HIV. In 2013, in the United States, gay and bisexual men accounted for 81% (30,689) of the 37,887 estimated HIV diagnoses among all males aged 13 years and older and 65% of the 47,352 estimated diagnoses among all persons receiving an HIV diagnosis that year. Insidious discrimination is often cloaked in concerns over public health and safety; we have seen exactly that kind of pretense used to justify the ridiculous bathroom laws in North Carolina and Mississippi. Regulations about who pees in a stall next to you are not about health and safety. But regulating whose blood is available for a transfusion absolutely is. The LGBT community would do better to acknowledge that difference and fine-tune its criticism.

Opponents of the policy are right to argue that the 2015 amendment doesn’t change much. The majority of MSMs who sought to donate blood under the 1992 rules are still prohibited from donating under the current ones. But while the change may not be meaningful in substance, I believe it is meaningful in form.   HIV is certainly still a problem, but the FDA’s revision proved its willingness to amend a policy that was clearly overbroad. The change may not be everything, but neither is it nothing.

A more plausible criticism of the ban on MSM blood donation is that it needs to be further narrowed. Under the current rule, a woman who had a hundred different sexual partners in the last year would be eligible to donate blood, while a healthy gay man who has maintained a monogamous relationship for twenty years could not. Perhaps there are a better set of guidelines to be written – one which zeroes in with greater accuracy on the subset of MSMs that poses the greatest risk. But advocacy for further change needs to come at the right time. And that time is when credible science supports the change. Until research indicates that MSMs can donate more freely without creating a significantly increased risk of blood banks collecting contaminated blood, the current ban seems reasonable. And the inverse – a blood bank that prohibited some people from donating, but failed to prohibit the group of people statistically most likely to spread a terminal illness through blood donation – would be obviously negligent, and probably even reckless under even the most relaxed legal standards.

Arguing that the ban on blood donation is patently unfair and discriminatory also has the untenable result of minimizing the health crisis within the gay community. At the end of 2011, an estimated 500,022 (57%) persons living with an HIV diagnosis in the United States were gay and bisexual men. Manipulating FDA guidelines so that MSMs without HIV can donate seems a bit like missing the point. The gay community is the American community, and we owe it to ourselves to do better. If the HIV crisis within any one demographic is so severe as to limit millions of Americans from voluntarily helping donate much-needed blood, then something is seriously wrong.

The most impactful part of the FDA’s 2015 revision was not in the substance of the revision – but rather, in the fact that a revision was made at all. The FDA has also been clear that it plans to continue the study of relevant blood science and HIV epidemiology in an effort to further relax the restriction if such a relaxation can be done responsibly.  Those who feel the tangible unfairness at the gay community’s being prohibited from assisting its own members following the horrifying shooting in Orlando are right to be upset. But the disgust and ire and empathy should be directed at the HIV crisis itself – not at derivative iniquities. There may come a time in the near future when good science will support another change to the FDA’s policy.

On its website, the FDA has made the pledge:

“The FDA will closely monitor the effects of the current changes over the next few years in order to help ensure that blood safety is maintained. At the same time, the FDA will continue to work in this area and review its donor deferral policies to ensure they reflect the most up-to-date scientific knowledge. This process must be data-driven, so the timeframe for future changes is not something that can be predicted.”

The right fight is the one that holds the FDA to its own promise to explore the science and make changes that are only as restrictive as they truly need to be.