Nancy Grace: Steven Avery Told Me ‘to My Face’, He Was In the Pit 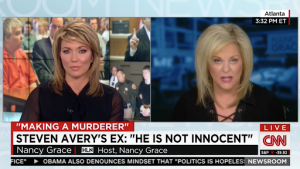 This article comes from the editorial staff of LawNewz.com, a new Abrams Media website covering law and crime.

Nancy Grace blasted the hit Netflix documentary Making a Murderer — claiming that Steven Avery told her to “her face” he was in the pit, where the bones of 25-year-old freelance photographer Teresa Halbach were later found. Grace is convinced that Steven Avery is guilty, and the “mockumentarians” are on some kind of ill-begotten crusade to convince America that Avery is just an innocent man, wrongly convicted… twice. Oh, and to make money.

Here she is on with CNN’s Brooke Baldwin:

We first told you last week about how Nancy Grace went bananas over the documentary, saying that Avery’s blood was found in “six spots” on the murdered woman’s car. During the program, Grace also took issue with the filmmaker’s interview of Avery’s ex-girlfriend, who Grace claimed didn’t want to be in the documentary. In an exclusive CNN Headline News interview, the ex claimed that Avery was “real a monster.”

Earlier this week, Avery filed his own appeal in the case, asserting his due process rights were violated.