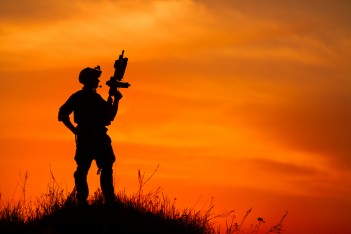 With United States military activity in Afghanistan barely on the American public’s radar anymore, it will likely come as a surprise to learn the increased role military lawyers now play in making battlefield decisions.  This is especially true in determining when the 9,800 troops remaining in the country may use deadly force.  According to a recent Wall Street Journal article, President Obama has finally agreed to loosen some of the restrictions on use of deadly force for Americans still operating in the country, a majority of which come from various military special operations units.  However, with more freedom, comes more responsibility and military lawyers are now making more frequent decisions about whether deadly force is justified.

According to the report, while we may have gone into Afghanistan in 2001 to oust the Taliban for harboring Osama Bin Laden, a senior Green Beret told the newspaper we are no longer “at war with the Taliban.”  This means when U.S. forces meet Taliban forces on the battlefield, military lawyers become an extremely important component in the chain of command that decides when it is appropriate to use deadly force.

Beginning in 2014, the report states special operations forces are only allowed to strike Taliban targets if they present “a direct threat to U.S. or allied forces, or if the Afghan government faces a catastrophic failure such as loss of a major city.”  If only Afghan soldiers are in harms way, the rules reportedly become a bit more open to interpretation when it comes to striking the Taliban.

As a result, the article states, “U.S. commanders and military lawyers make seat-of-the-pants calls every day about using force against the Taliban, trying simultaneously to respect the rules, avoid killing civilians and spare their allies casualties that a quick airstrike might prevent.”

This confusion led Gen. John Nicholson, the top U.S. General in Afghanistan, to request greater authority from the White House to provide Afghan troops with more American airpower to aid their missions.  President Obama responded and now American airpower can be used to protect all Afghan military units.  This includes Afghan units on offensive missions rather than just providing protection when the Afghans found themselves in defensive positions, about to be overrun by Taliban forces.

However, the greater authority seems to have only placed a bigger burden on military lawyers to make the right call, in a greater number of situations.

The article provides an example of a mission from late May in which an Afghan Special Forces Battalion along with U.S. Green Berets serving a support role attempted to retake a critical supply route.

As the helicopters full of Afghan commandos landed, U.S. planes flying overhead provided a live stream of the landing area to the command post about 60 miles away in Kandahar.  One camera feed picked up what appeared to be 15 insurgents, but first the Green Beret Captain had to radio his battalion staff HQ — including the lawyers — at Bagram Air Field to request permission to engage the insurgents with airpower.  By the time the Captain received a reply, the 15 insurgents had disappeared.

This cat and mouse game went on for several hours, with insurgents approaching to within 300-yards of the Afghan commandos position.  However, an airstrike was never authorized.  Part of the reason seems to be that analysts, lawyers and commanders at HQ did not want to authorize a strike on men who had not fired a shot at the commandos.  The experienced Green Berets felt the Taliban know the U.S. rules so well that they would put down their weapons when the big gunships would come overhead to avoid getting killed.

Finally, nearly five hours later, the commandos were withdrawn by helicopter having accomplished essentially nothing.  A week later another mission was ordered to retake the supply route and when they arrived on the scene they found 18 boobytraps, likely left by Taliban insurgents.

LawNewz.com spoke to Jack Murphy, a former U.S. Army Ranger and former member of the U.S. Army 5th Special Forces Group.  Murphy did multiple combat tours in Iraq, and one in Afghanistan, and is the editor-in-chief at SOFREP.com, a special operations focused blog.  Through his own experience and his contacts will current military personnel, Murphy knows better than most the frustration of restrictive and/or ambiguous Rules of Engagement (ROEs).

“The ambiguous ROEs force Green Berets to work in a gray area, potentially forcing a them to take unnecessary risks to demonstrate to headquarters that the perceived threat is truly an imminent threat,” Murphy said.

Five minutes later, an officer at headquarters radioed for an update. The captain in Kandahar thought of a way to prove the men in the hills were hostile: If the Afghan commandos sent a small element forward—close but not too close—the insurgents might take a shot at them.

It would be a balancing act. “You never want to put the commandos at risk to loss of life, limb or eyesight,” the captain said. But pushing the men forward might allow the U.S. to hit the enemy from the air and end the encounter.

“These are all soldiers I know,” he said. “I don’t want them to walk into an enemy ambush.”

At 12:45 a.m., the U.S. Special Forces team sergeant reached the Afghan commander in Elbak by phone. “They’re trying to maneuver and set up an ambush,” the sergeant warned.

Murphy also expressed concern about what the second guessing does to highly trained, experienced combat soldiers.

‘The second-guessing tells a Special Forces team that headquarters doesn’t have their back.  It also tells the Afghan commandos that the United States does not have their back,” Murphy said.

He then added, “Eventually this leads to soldiers asking, ‘why are we here?’  And that is very harmful to morale.”