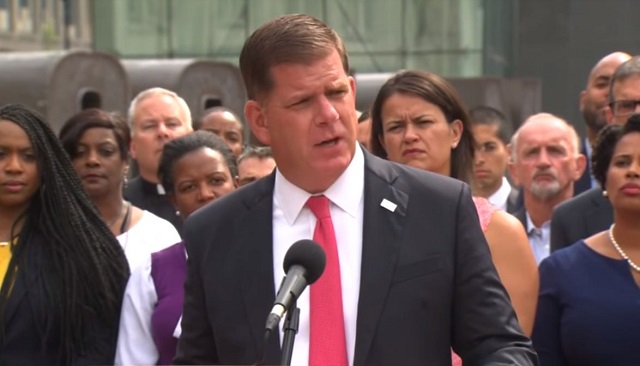 The organizer of a Boston “Free Speech Rally” is suing the city’s mayor for slander after he allegedly made a false characterization of him and others involved as “neo-Nazis” and “white supremacists. Brandon Navom claims in his complaint, filed Monday in state court, that Mayor Martin J. Walsh made comments implying that those behind the rally were connected to the event in Charlotesville, Virginia that resulted in deadly violence.

The complaint quotes Walsh as saying about groups, “it’s my understanding they’re coming to Boston,” and “there’s no place for the hate that they’re spewing.”

After those statements, Navom claims, he lost his job as a software consultant after an “internet hate mob” targeted him and his employer. He claims his personal information, including home address, were revealed as well.

Navom was on the list of scheduled speakers for the August event, but ended up not attending at all. In the end, only a few dozen people attended the rally, with thousands showing up to counterprotest.

“This was a horrible ordeal that I could never have imagined I’d ever have to go through,” Navom told The Boston Globe. He is seeking a total of $100 million in damages.

A representative from the mayor’s office told LawNewz they have no comment on the lawsuit.