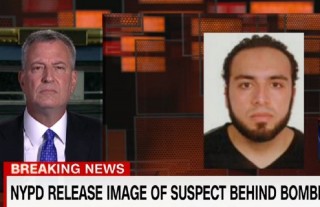 Law enforcement officials in New York announced on Monday morning the identity of a suspect in this weekend’s bombing in the Chelsea neighborhood of Manhattan. Video reportedly shows Ahmad Khan Rahami in the vicinity of the bombing, as well as a second explosive device that was recovered before it detonated. This took place after another bomb went off in Seaside Park, New Jersey, and additional explosives were located at a train station in Elizabeth, New Jersey.

Rahami is a New Jersey resident, and recent reports indicate that he may be part of a local terror cell operating in New York and New Jersey. Still, New York City Mayor Bill de Blasio hesitates to call the attacks terrorism, waiting for more details before reaching that conclusion. New York Governon Andrew Cuomo acknowledged that there is no known link to international terrorism, but he was more willing to characterize the attack itself as terror, and said it will be prosecuted as such.

Whether or not the word “terrorism” is used may seem like semantics, but words have meaning, particularly when it comes to legal definitions and the treatment of criminals. If the bombings are considered terrorism, and if Rahami is indeed shown to be part of a cell, he could potentially be treated as an enemy combatant of the United States. This would affect how law enforcement officials are able to detain and interrogate him.

To compare, Boston Marathon bomber Dzhokhar Tsarnaev was not treated as an enemy combatant, despite demands from some Republicans. Tsarnaev wasfrom Chechnya, but is a U.S. citizen. He was also not connected to any particular known terrorist organization. Rahami is also a naturalized U.S. citizen, originally from Afghanistan, but recent reports indicate that he may be part of an active terror cell.  U.S. citizens can be considered enemy combatants, however they are entitled to more rights than non-citizens, as far as due process.

A 2012 article in the Case Western Reserve Journal of International Law addresses this issue with regards to whether al-Qaeda operatives can be classified as enemy combatants. The article says that because al-Qaeda is not a party to the Geneva Conventions, their operatives may be considered unlawful enemy combatants who may be killed or detained in accordance with the laws of war, and can be interrogated as long as the methods are in accordance with international law or “self-imposed domestic restrictions.” If Rahami is connected to a group like ISIS, al-Qaeda, or a similar organization, he could potentially be treated as an enemy combatant.

However, the article also addresses attackers who may share a similar ideology to foreign terror groups, without officially being part of them. The Obama administration refers to such actors as “domestic jihadists,” and they are not considered enemy combatants. While they may be inspired by recognized terrorist organizations, they are treated as regular criminals in terms of detention, interrogation, and prosecution.

But even if Rahami is not considered an enemy combatant, the criminal law — bother federal and in New York — differentiate between acts of terror and ordinary acts of violence.

(A) involve acts dangerous to human life that are a violation of the criminal laws of the United States or of any State;

(B) appear to be intended—

(i) to intimidate or coerce a civilian population;
(ii) to influence the policy of a government by intimidation or coercion; or
(iii) to affect the conduct of a government by mass destruction, assassination, or kidnapping; and
(C) occur primarily within the territorial jurisdiction of the United States.

Additionally, 18 U.S.C. § 2332f provides for punishment of those who carry out bombings of “places of public use”

New York state law also has its own terrorism statutes, with a similar definition. If a crime is considered an act of terrorism, the crime may be deemed a higher level of offense.

Much remains to be learned about the current situation, such as whether Rahami was indeed behind any of the attacks, if he worked as part of a group, and what the nature of such a group is. But if the acts are deemed to be terrorism, it could certainly effect how the case is treated going forward.