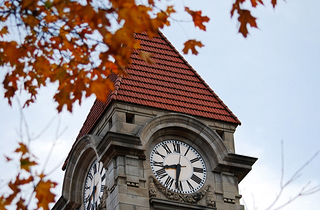 Usually when we hear about college students suing schools over violations of Title IX in the course of a rape case, it involves female students alleging that the investigation of their assault was botched. The latest case, however, is different: A male Indiana University student has filed a 76 page lawsuit against the school alleging gender bias, stemming from how a rape allegation against him was handled. Plaintiff Aaron Farrer alleges that the University “violated Title IX by creating a gender biased, hostile environment against males” in expelling him. His accuser, Marion Zerfoss, is also named as a defendant (LawNewz only identifies sexual assault accusers who have made their identities public, which she has done) and various school administrators.

As Farrer tells it, “on September 25, 2015, Zerfoss initiated all relevant physical contact with Farrer.” He cites her admission that she consented, only to say later that he shouldn’t have acted because she had been drinking. “I was, like, telling him, like, to have sex with me,” the complaint quotes Zerfoss as saying in a police interview. “I’m not disagreeing that I might have said that. What I’m saying is I was way too drunk and everyone knows that he was sober. You can’t have sex with a drunk girl like that.” The allegation is that “Zerfoss acted with malice” by accusing Farrer of sexually assaulting her “because she needed an excuse to hide her embarrassment.”

Farrer claims that he was also drunk, having had about six or seven drinks that night, and “did not see Zerfoss drink alcoholic beverages at the party, except for one sip out of a drink he was holding.” He also has an explanation for an apologetic text message he sent after the fact, which Zerfoss has cited when speaking with the media. “I totally fucked up,” Farrer said in the message. “I knew it was wrong and I did it anyways. Please don’t hold yourself accountable for anything that happened after you started drinking last night.” In the complaint, he claims that a friend of Zerfoss suggested he send it so that she wouldn’t feel guilt or shame about what they saw as a consensual sexual encounter.

Zerfoss has a very different story, she told WRTV in September that “I became extremely intoxicated, was falling over, and couldn’t speak well,” adding that Farrer “stated he had a test in the morning, wasn’t drinking, and he had no problem watching me.” In addition, according to the Indiana Daily Student, one of the police officers on the case was suspicious of Farrer from their first conversation. “Mr. Farrer did not seem to understand fully what consent was in our interview,” the officer said. “He also did not seem to fully understand the definition of rape.” At Indiana University orientation, all students are required to watch the performance of a musical about the school’s consent policy, which stresses the concept of verbal consent and that an intoxicated person cannot consent.

Since he says he was also drunk, not being allowed to file his own complaint is one of the reasons Farrer alleges the university’s policies discriminate against men in sexual assault investigations. In the case against him, he also claims that he was not provided the opportunity to review witness statements and other evidence. While both sides have attempted to press criminal charges, prosecutors don’t think that they have enough to go on.

While Indiana University cannot comment on pending litigation or, due to federal privacy laws, specific student disciplinary cases, the university’s Sexual Misconduct Policy provides for a fair, impartial and robust investigation and adjudication process when responding to reports of alleged sexual assault. Indiana University is strongly committed to providing a safe and secure environment for all members of its community, and assuring that its processes are fair and afford due process protections.