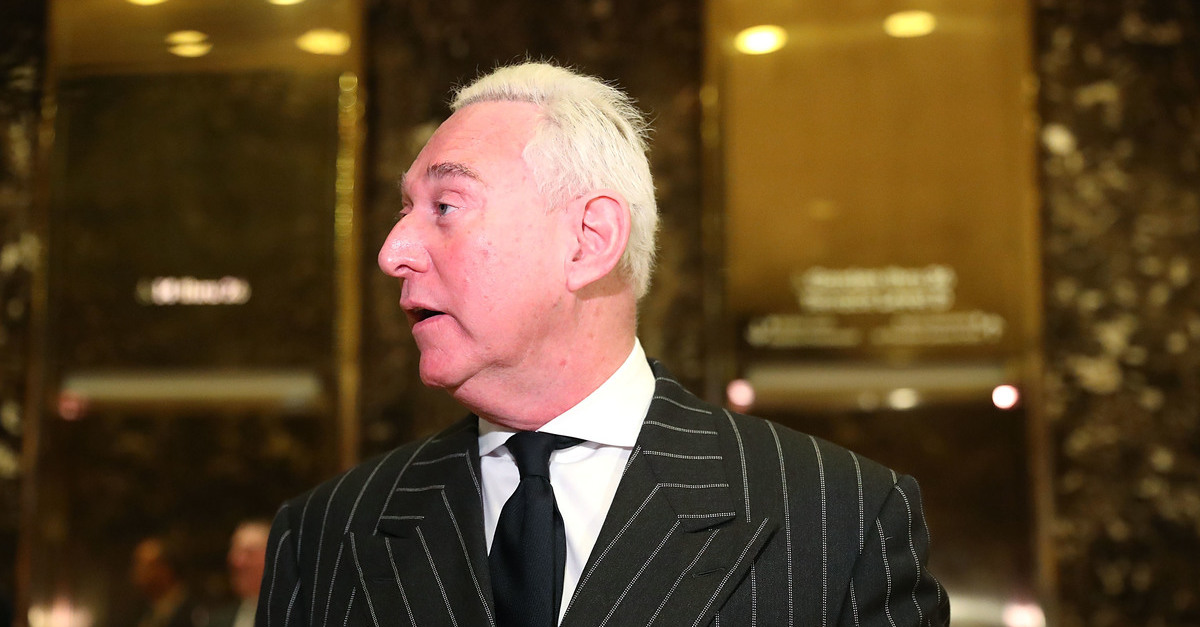 Roger Stone has one setting and one speed: talk ratcheted up to eleven. And something he recently told Tucker Carlson just might implicate President Donald Trump in the crime of perjury, according to New York University Law Professor Ryan Goodman.

In a weekend analysis for centrist legal blog Just Security headlined “How Did Roger Stone Know What the President Told Mueller?,” Goodman first addresses a bit of social media chatter concerning Stone’s professed knowledge of what the 45th president told special counsel Robert Mueller in a series of written answers to Mueller’s questions about Russian interference in the 2016 presidential election.

“[The media] act as if Stone acted as the conduit between the Trump Campaign and WikiLeaks or between Donald Trump and WikiLeaks,” Stone told Carlson last Friday night. “When the President answered the written interrogatories he correctly and honestly said, ‘Roger Stone and I never discussed this,’ and we never did.”

How Stone knew what Trump told Mueller is easy, Goodman notes, because CNN itself reported on that exact question-and-answer in an article published late November last year which begins with the line, “President Donald Trump told special counsel Robert Mueller in writing that Roger Stone did not tell him about WikiLeaks…”

Goodman dismissed the “rampant” online speculation that the White House somehow “privately communicated” any of the president’s answers to Stone. But, the law professor noted, Stone’s latest round of blabbing may signal trouble signs ahead for President Trump.

Why? Because of the federal crimes of perjury and witness tampering.

“It is hard to fathom that the two men did not discuss Stone’s information on WikiLeaks given the detailed revelations in Stone’s indictment about his communications with senior Trump Campaign officials and his work on behalf of the Campaign in liaising with WikiLeaks,” Goodman writes.

Why would people believe that his oldest most trusted adviser was doing something like this for him at the same time that he kept talking up WikiLeaks and yet he knew nothing about it?

Furthermore, according to Goodman, the special counsel’s draft statement of offense for right-wing author and conspiracy theorist Jerome Corsi “also adds to the picture” because page two of that court filing claims Corsi “understood [Stone] to be in regular contact with senior members of the Trump Campaign, including with then-candidate Donald J. Trump [and that Stone] asked Corsi to get in touch with [Wikileaks] about materials it possessed relevant to the presidential campaign.”

Essentially, Goodman is arguing that the dual Stone-Trump denials about WikiLeaks stretch the bounds of plausibility. But that’s not all.

Goodman also suggests another layer of criminality may be at play.

“[W]ho leaked this specific content in Trump’s written responses to Mueller and why?” the NYU professor asks. “That’s hard to know, but it could be a way for Trump or his team to communicate to other witnesses to hold the same line. Indeed, this may be a pattern among Trump associates: to tell their lies in public as a method to signal to others.”

Too fanciful to suggest a “get on the same page” strategy of plain-sight falsehoods and winks telegraphed to potential co-conspirators? Not really.

As Goodman and former White House counsel Andy Wright previously pointed out, Mueller himself is on the lookout for precisely those sorts of antics. Regarding Michael Cohen‘s sentencing memo, the pair wrote in December:

Mueller’s theory of the case recognizes that public statements are methods of communication with other witnesses. That’s important for potential conspiracies to commit perjury or otherwise obstruct justice. This also increases the likelihood that Mueller will regard public statements by President Trump and his lawyers as signals to other witnesses–such as publicly dangling pardons and favoring the “strength” of uncooperative witnesses.