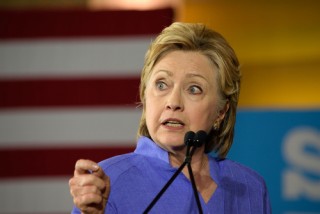 A pro-Hillary Clinton super PAC is accused of accepting illegal donations from a company that holds contracts with the federal government. That’s a big no-no under federal law.  LawNewz.com reviewed the Center for Response Politics online federal database and found the Massachusetts-based Suffolk Construction donated at least $200,000 to the pro-Hillary group, Priorities USA, in July and December of 2015.  As The Hill first reported, at the time of making the contributions, Suffolk Construction also held multiple contracts with the U.S. Department of Defense worth nearly $1 million. LawNewz confirmed that report through a search on usaspending.gov.

Why is that a problem? Federal law says that is not allowed. Here is what the government’s website says (Federal Election Campaign Act of 1971 (2U.S.C.§441c(a):

Federal government contractors may not make contributions to influence Federal elections. For example, if you are a consultant under contract to a Federal agency, you may not contribute to Federal candidates or political committees. Or, if you are the sole proprietor of a business with a Federal government contract, you may not make contributions from personal or business funds.

And, in fact, Priorities USA, which is the largest pro-Clinton PAC, makes it clear to donors that federal contractors are not allowed to make contributions. This is what it says on their website:

Priorities USA has nearly $52 million in cash, according to their most recent FEC filings.

Some have raised concerns that the ban on federal contractors raises constitutional concerns regarding freedom of speech. And, in fact, the FEC has been slow to act on these type of cases. In 2014, in a 5 to 1 vote, the FEC dismissed charges against the Chevron Corporation saying that the company could not be held liable merely because it had a subsidiary that was a federal contractor.

“Every indication at this point is that the federal pay-to-play law applies to super PACs, though this question has yet to be litigated. The federal law explicitly prohibits federal contractors from making campaign contributions to federal candidates, parties and PACs, and super PACs are federal PACs,” Craig Holman from the nonprofit advocacy group Public Citizen wrote in a recent post.

LawNewz.com has reached out to Priorities USA and the Suffolk Construction company for comment. We will update this post if we hear back.