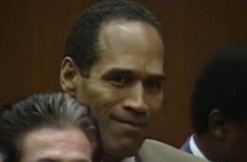 A knife discovered on O.J. Simpson’s estate doesn’t seem to be linked to the 1994 killings of Nicole Brown and Ron Goldman, sources told NBC. So far, the investigation has apparently turned up nothing useful.

For example, there’s no blood on the knife, said Trent Copeland, attorney for retired LAPD officer George Maycott, to NBC. A construction worker reportedly discovered the knife while helping demolish Simpson’s estate, and gave it to Maycott in 2001 or 2002. The officer allegedly didn’t turn it in back then because the case was closed, but was forced to hand it over after retiring in January.

The knife does not seem to have been buried for a length of time consistent with the killings, NBC’s sources said. However, those same people said forensic tests still had to be conducted before ruling out the knife for good.

“The question is—is this just another knife that is investigated as a connection to the murder, or will there be something this time,” LawNewz Editor-at-Large Beth Karas said. “Nicole and Ron’s DNA need to be on the knife. If their DNA is on it, that goes a long way to arguing it is indeed the weapon, but it does not necessarily connect O.J. Simpson to the case unless there is forensic evidence from him as well.”

Remember, Simpson was acquitted for the slayings in 1995, and that case remains open. Hard thing to forget when the court of public opinion convicted him long ago. He can’t even be tried again thanks to the Fifth Amendment’s double jeopardy clause. So 1) there’s apparently no blood on the new knife, and 2) it may not have been buried in the correct time frame. If further investigation bears this out, then forget it: The case remains open.

It also doesn’t help that this sort of discovery has happened before. A knife pops up. Seems like it could be the murder weapon. But, nope, police checked, and it actually wasn’t.

Simpson is in prison for an unrelated kidnapping and armed robbery.