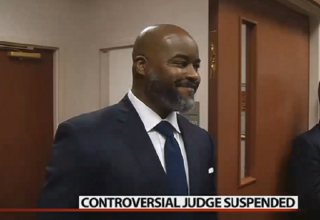 A judge reached a deal with the Kentucky Judicial Conduct Commission on Monday to ensure he will not be thrown off the bench over misconduct charges. To put an end to the months long dispute, Jefferson County Circuit Judge Olu Stevens agreed to accept a 90-day unpaid suspension.  In addition, he also offered an apology for making racially charged remarks about the county’s top prosecutor and the victims of a home invasion robbery.

In April, the Kentucky Judicial Conduct Commission accused Stevens of multiple counts of misconduct for making racially charged comments, according to WDRB. A majority of the misconduct charges reportedly stemmed from remarks made on Facebook that insinuated Commonwealth’s Attorney Tom Wine was a racist.

According to the Courier-Journal, Stevens dismissed a panel of 41, nearly all white, potential jurors in a criminal case with an African American defendant back in 2014.  Wine challenged the decision, questioning whether a trial judge had the authority to dismiss an entire jury panel, absent evidence of intentional or systemic exclusion of minorities from the panel.  When the Kentucky Supreme Court agreed to hear oral arguments on the case, Stevens apparently took his frustrations out in a series of posts on his Facebook page.

Stevens’ Facebook posts alleged Wine “was a racist who wanted to preserve the right to all-white juries,” according to the Courier-Journal’s summary of the content of the posts.

At the hearing on Monday, Stevens reportedly read a statement that admitted he was “wrong” to make statements that implied Wine was a racist and he offered an apology for doing so.  The article states Wine accepted the apology in his own statement released on Monday.

Stevens also faced charges of misconduct for remarks he made to the victims of a home invasion robbery during a sentencing hearing in 2015.  Stevens reportedly accused the victims of “fostering [racial] stereotypes” over statements included in the victim impact statement provided to the court, the Courier-Journal reported.  In the statement, the victims expressed concern that their 3-year-old daughter had a fear of African American men as a result of the home invasion.

“I wonder if the perpetrator had been white, would they be in fear of white men?” Stevens said during the 2015 sentencing hearing, according to WDRB.com. “The answer would probably be no. I’m offended by that.”

Stevens acknowledged the remarks were inappropriate during the hearing on Monday morning.

“While I maintain that we should continue to speak out against racial stereotyping or discrimination of any kind, I acknowledge that directing my frustration at the victims of the crime was not the appropriate method or venue to address the subject,” Stevens reportedly said.

The final hearing before the Judicial Conduct Commission was scheduled to begin Monday morning, but it was canceled after both sides announced they had reached the deal.  Under the terms of the deal, Stevens’ 90-day unpaid suspension begins immediately and will end on October 30.  According to the Courier-Journal, Stevens had already been on paid suspension since April when the commission announced they would take up case.