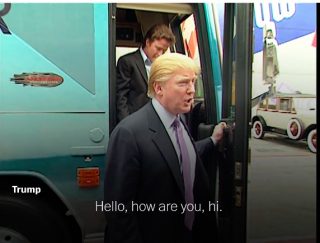 Did Trump know he was being recorded? If not, a hot mic can be a criminal act in California, and NBC potentially liable. California Penal Code 632 criminalizes any person who “without the consent of all parties” records their conversations. California Penal Code 637.2 specifically authorizes the right of the person whose privacy was invaded to bring a civil suit, with an incredible treble damages provision for RICO-style punishment. That converts, say a $1 Billion claim into $3 Billion of damages. A hot mic can still be an illegal recording if the parties to the conversation thought the mic was not active and not recording.

This corresponds to the “reasonable expectation that the conversation was not being recorded” element of the civil claim. If Trump can prove that aspect — and the very nature of the conversation clearly implies it, from a jury perspective — then NBC would have to prove they did not intentionally record the conversation, subjecting NBC to inquisitive discovery — like does NBC have a habit of “hot mic” recordings? If NBC didn’t record it purposefully, why didn’t they destroy it when they found they had “accidentally” recorded it? Maybe this is why NBC let it leak rather than publish it themselves — to try to distance themselves from their own possibly lawless acts? Worse yet, what might this claim do for other people? How many illegal recordings does NBC have in its vault? Why didn’t they have a custom and practice of deleting anything “accidentally” recorded if it was, in fact, accidental? What other celebrities and citizens might have a claim? Remember the recording itself is illegal and damages are “not a necessary” prerequisite to a claim, with $5,000 damages per incident. That might be some class action.

Does the First Amendment help NBC? The First Amendment protects publishing, not illegal recording. NBC would not even have a sure-fire First Amendment defense for publishing.  The First Amendment is not owned by big media; the media cannot easily use it to violate another’s First Amendment rights to unrecorded private speech. As the critical concurrence by Justice Breyer (joined by Justice O’Connor, and essential to any majority outcome in the case),  in their decision made clear in Bartnicki (a “narrow holding limited to the special circumstances present,”) that the publisher’s defense depended upon the fact the publisher “neither encouraged nor participated directly or indirectly in the interception” of the conversation. That’s how tough the law treats these kind of these illegal recordings. And there is precedence for such criminal prosecutions as well, even in high profile cases involving sex allegations and the Presidency: ask Linda Tripp, of Lewinsky fame, who was indicted by a Maryland prosecutor for illegally recording Lewinsky’s conversations.

As for NBC, an executive told The Washington Post that NBC attorneys did take several day to vet the tape, which was why The Washington Post scooped them on the story. The executive that talked to The Post said he was unaware of any legal issues  and that Trump was “apparently aware at the time that he was being recorded by a TV program.” Maybe aware he would be recorded for the interview, at some point, but was he really aware that the mic was hot when he was having a private conversation with Bully Bush? Based on what was captured, you wouldn’t think so.

The deep juror skepticism of big media will subject NBC to even more scrutiny, and may unleash a range of claims from other people who didn’t know NBC treated their interviewees like a walking open mic to record secretly as they please. That might turn out to be one expensive mic. Trump-Like expensive.

Robert Barnes is a California -based attorney whose practice focuses on tax defense and First Amendment law,