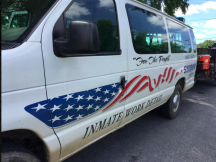 Six inmates at the Polk County Sheriff’s Office in Georgia were credited with saving a detail officer’s life last week.

According to a Facebook post made by the official Sheriff’s Office page, the inmates were on a work detail last Monday when a correctional officer fainted.  NBC Atlanta reported that it was 76 degrees outside and the humidity was at 100% that morning.

The inmates searched for the officer’s work phone and used it to call 9-1-1 to get emergency medical services and more officers on the scene.  The men also removed his outer vest in an attempt to cool him off in the intensely humid heat.

The men were rewarded for their good deed on Friday: the inmates were treated to a free lunch and desserts in a park prepared by family members of the officer.

“As we watched the horrific man hunt this week of the two inmates that killed two Correctional Officers and were captured last night we all know that Monday could have ended differently for our Officer,” the Facebook post read.  “We are very proud of the actions of all 6 inmates involved.”