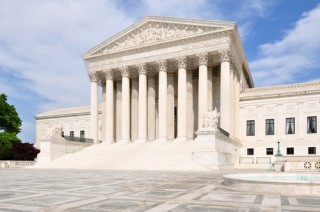 On Wednesday, the Supreme Court heard arguments in Whole Woman’s Health v. Hellerstedt, what some consider the biggest abortion case to reach the high court in years. The case focuses on a 2013 Texas law that places two new regulations on doctors who perform abortions: one on their facilities, and one on their ability to admit patients to hospitals. Here’s what makes it so interesting:

One part of the law says that abortion clinics, most of them now similar to a doctor’s office, must have a more hospital-like environment. If clinics cannot meet the standard, they’d have to close.

Should the Supreme Court uphold the law, 34 out of the 40 abortion clinics in the state will have to shut down, according to The Atlantic. Close to a million women would then live over 150 miles from a place where they could get an abortion, and would have to wait more than three weeks to get an appointment. Texas already prohibits abortion after 20 weeks. Depending on when a woman first learns of her pregnancy and decides to get an abortion, the wait time could push the appointment past the point of no return.

In past abortion cases, arguments for restrictions hinged on protecting the life of an unborn child. For example, it was determined that determined that once a fetus would be viable outside the womb, it is entitled to greater protection. In the present case, supporters of the law do not focus on the morality of abortion in general, when it should be allowed, or even a particular method of abortion. Instead, they say women getting abortions would be better served by these restrictions, because the higher medical standards would mean a greater level of care for them. They claim that better conditions and greater accessibility to hospitals are in the best interest of women getting abortions, and are necessary in protecting their health. Critics say that the regulations are unnecessary and would only make it more difficult to get an abortion.

When the case was first heard by a federal district court, the restrictions in the Texas law were deemed too restrictive because the regulations were medically unnecessary. The Fifth Circuit Court of Appeals reversed the decision, saying that the research behind the regulations was done in the legislative process, so it was not the court’s job to say whether they were necessary. This is a little odd, to say the least.

See, the standard for whether a law restricting abortion was set in the 1992 case, Planned Parenthood v. Casey. Casey says that a law cannot place an undue burden on a woman seeking an abortion before the fetus is viable. An undue burden exists if the purpose of the law places a substantial obstacle in a woman’s path. But, the Court states, a law is fine if it is not a substantial obstacle to a woman’s right to choose, and is just a means of respecting the life of an unborn child.

So, the reason why it was strange for the Fifth Circuit to not weigh in on the necessity of the regulations is because the whole test for the law is whether it actually does something to promote life or health, without just being a means of keeping women from getting abortions. How can a court determine whether there is an undue burden without examining the reasoning behind the burden? Any information regarding the necessity of the restrictions in promoting a woman’s health would aid a court in evaluating the merits of the law. The Court of Appeals arguably should have examined this when it heard the case, so it is possible that the Supreme Court could knock it back down to them for this reason.

Assuming that does not happen, the Supreme Court will now have to decide the matter. What it will likely boil down to is: would the restrictions necessarily shut down existing clinics, to the extent that women will have to travel far and have long waits to get appointments, and if so, whether these burdens outweigh the medical necessity of the higher standards the law would enforce. If the Court determines that there is no medical necessity, and the Texas law would not benefit a woman’s health, it would likely fail the test because it would only be an obstacle.

The absence of the late Justic Scalia could have a great impact on this case. Scalia was known to be in favor of restricting abortion, and most likely would have voted to uphold the Texas law. Without him, the makeup of the remaining eight justices means that the decision could actually be a 4-4 tie, which would uphold the Texas law without setting a legal precedent. That means a similar case could find its way to the Supreme Court in the future, and they would not have to abide by this decision. If Scalia were still alive, this case very well could have been 5-4 in favor of the restrictions, and it would set a precedent.

So what does all this mean for the country? On the one hand, if the Texas law is upheld, it could be an excuse for other states to enforce similar requirements, which could shut down more abortion clinics, or at the very least cost doctors money and lost business while they upgrade their facilities. It would also open the door to similar restrictions on abortion that would also claim to be in the interest of a woman’s health. On the other hand, if the Court determines that the law truly enforces necessary safety measures, it could theoretically save lives. If the law is knocked down, it would mean that the Court feels the restrictions are unnecessary. Should that happen, a woman’s ability to get an abortion would gain protection. The argument of justifying restrictions in the interest of the woman’s health instead of the unborn child’s life is a new approach. Knocking down this law wouldn’t put an end to people using this line of reasoning, but it would place an obstacle in their path.