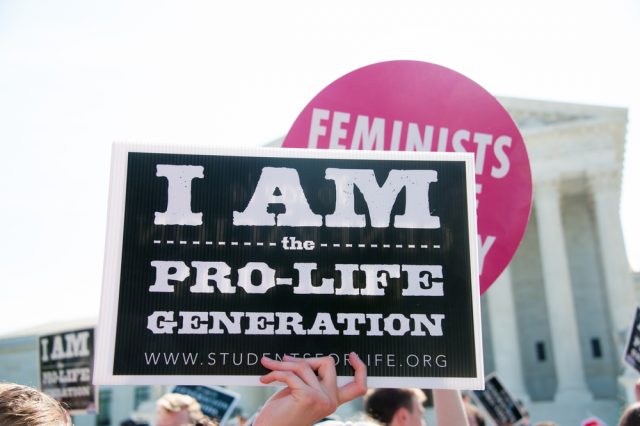 You’ve got to hand it to the pro-life lobby. They’ll find ways to declare victory even when their win was unanticipated and nonsensical. In Trump’s new tax plan, a minor change made a big statement. Under the revised legislation, expectant parents can now use 529 school-savings plans to save tax-free money for an unborn child. The bill summary specifically defines the subjects for the savings plan as as “a child in utero.” A child in utero means a member of the species homo sapiens, at any stage of development, who is carried in the womb.”

That’s right. Our legislators are spending their time making sure fetuses can open mutual funds. And the best part of this nonsense is the reaction of pro-lifers themselves. Tom McClusky, president of March for Life Action, said about this new language: “it wasn’t something that we were specifically calling for,” but of course, “we’ll fight to make sure it stays in there.”  In other words, no one needed this change, no one asked for this change, and no one is considering if it makes any sense; when legislation sounds pro-life, it simply must be good and these people will start fighting for it long before engaging their brains on the topic.

I understand and respect the moral viewpoint that life begins at conception. Expectant parents have every right to love and celebrate their unborn children from the first moment possible. But guys, this isn’t decorating a nursery or playing Bach through Belly-Buds. This is the tax code. This is the law and the law has to draw a clear line somewhere, or things will be a complete mess. This isn’t a moral issue – it’s a practical one. Under the law, a person isn’t a person until he or she is born alive. We begin counting a person’s life at his or her birthday, and we ascribe legal rights to people at birth.

Think about it for a minute. If we changed our entire system of thought, would we also change inheritance laws to allow an estate to pass to an unborn child? Would we revamp our immigration laws to confer citizenship on children conceived in the United States? Would fetuses be allowed to bring lawsuits? And if so, there’s the distressing, but ultimately necessary question – what happens if the child were never born alive?  The law chooses– and has always chosen– to count life starting at birth because it’s the only starting point that makes sense.  Rep. Diana DeGette (D-Colo.) agrees: “This is a back-door attempt to establish personhood from the moment of conception. What’s next, giving a Social Security number to a zygote?”

One has to wonder how this legislative change even arose. I truly can’t imagine there having been substantial outcry from families desperate to invest in nine additional months of tax-free savings. I mean talk about the ultimate first-world problem. Anyone who’d argue for a tax break to start prepping for private school tuition before even they know if their child survives gestation should suffer tax penalties based on pure arrogance. But I’m guessing this one had far more to do with banks than with parents. Someone realized that the 529 sales teams could easily set up a kiosk at those baby expos, in between the car seat tutorials and the maternity photographers, and make a few bucks before new parents became too sleep-deprived to think about college savings.

The worst part of the tax change for 529 plans, though, isn’t even its outright inanity; rather, it’s the change’s diversionary function. Clearly, GOP lawmakers knew their constituents would so love seeing the words “in utero” in the tax code that they might not notice what was being done with adoption. The House Republican tax reform completely eliminates the adoption tax credit, which has been in the tax code since 1997.

Whatever the GOP’s plan was, though, it isn’t working. Individuals and groups alike noticed that adoptive families lose big under the new tax plan, and that the loss is anything but “pro-life.”

Amen. Being pro-life means being pro-adoption. Congress must remember this as we work through the details of tax reform in the coming weeks. https://t.co/7rPz6lU0hE

The thousands of families who embark in the draining and expensive process of adoption need and deserve the support of the government touting itself for being “pro-life.” The adoption lobby may not be as powerful as the investment bank lobby — but the GOP doesn’t get to have it both ways.  And simply throwing the word “uterus” in doesn’t fix things.