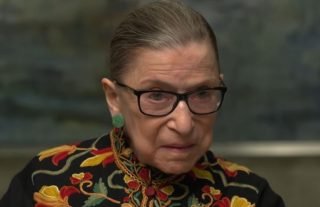 If campaign comments are evidence of bias in a way that invalidates the actions of a decision-maker (as the 4th Circuit claimed), then the same logic the 4th Circuit used to deny Trump’s travel ban must require Ginsburg’s recusal in the Supreme Court’s review of that travel ban.

The standard for recusal does not require a judge admit their bias. It only requires a review whether the public might “reasonably question” the “impartiality” of the judge in the matter. Liberals argued Justice Scalia merely hunting with a Vice President compelled his recusal. As Justice Scalia recognized, recusal is appropriate whenever a Justice has “said or done something” that impacts the perception of impartiality on a pending case. As Justice Scalia implicitly recognized, recusal may be necessary when the Court’s judgment would have “any bearing upon the reputation and integrity” of a party before the court if that individual Justice has voiced a prior opinion on that individual through friendship or hostility.

The general statute for recusal derives from section 455 of Title 28.  There is an occasional misunderstanding that the statute does not apply to Supreme Court justices, but that is incorrect, as it was often rewritten to make it stricter and stronger in its recusal standards after prior Justices failed to recuse. A justice “shall disqualify himself” whenever “his impartiality might reasonably be questioned” and whenever the justice has a “personal bias or prejudice concerning a party.” What matters is not the reality of bias, but the appearance of bias. The goal of the statute is to “promote public confidence in the impartiality of the judicial process.”

The travel ban case concerns the intentions of the President, as explicated in his campaign statements, according to the Fourth Circuit. (This is, of course, a completely unheard of precedent for any President; if held consistently, Obamacare was unconstitutional since the President repeatedly claimed on the campaign trail it was a mandate, not a tax, and the Supreme Court recognized if it was in fact a mandate, Obamacare’s cornerstone was illegal and unconstitutional). How can anyone not “reasonably question” whether Justice Ginsburg is partial about President Trump’s campaign intentions when she said the following about him:

•“everything is up for grabs” if Trump wins, in Ginsburg denouncing Trump, to the Associated Press

•“Now it is time for us to move to New Zealand” if Trump won, to the New York Times

Can anyone looking at those statements conclude Ginsburg would not be reasonably seen as partial about Trump in a case that is all about perceiving Trump’s intentions? If Justice Ginsburg is honest to the principles she claims, she must recuse from the Trump travel ban case now before the Court.