Gawker Founder Speaks Out on Peter Thiel, Says His Website Did Not Out Him as Gay 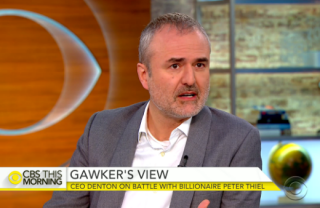 Gawker’s founder Nick Denton appeared on CBS This Morning on Tuesday, in his first interview since billionaire Peter Thiel acknowledged that he’s been funding lawsuits against him and his websites. Among those cases are Hulk Hogan’s lawsuit over clips of a sex tape Gawker posted online that resulted in a $140 million verdict for the former wrestler. The verdict was recently upheld in a post-trial hearing, but Denton does not think it will hold up on appeal.

The dispute between Denton and Thiel, the founder of PayPal, began after Gawker published a story outing Thiel as gay in 2007. Denton answered questions regarding Thiel’s role in the cases, as well as Gawker’s role in the media.

Denton admitted that at times Gawker oversteps boundaries in their stories, such as when they reported that a media executive hired a male escort. Denton said, “I regret that we published [the story],” which Gawker ended up taking down. But he does not think the Hulk Hogan sex tape story crossed any lines, because he feels Hogan had made his sex life “a topic of public discussion.”

The Gawker founder also does not believe his site outed Thiel as gay, saying that Thiel has said he was out to his friends back in 2003. Denton, who is also gay, said that the Gawker article about Thiel was written by a gay author, and that it was “celebrating the fact that the most talented venture capitalist in Silicon Valley was gay, in a largely straight male world.” Of course, the article did refer to Thiel’s sexuality as something “no one ever says out loud,” and described the challenges that a gay man faces in Thiel’s industry by saying, “a gay investor has no way to fit into the old establishment.”

When asked about Thiel saying Gawker is a bully, Denton said “I think it’s a little rich for someone worth $2.7 billion … to describe anybody else as a bully.”

As far as changing the way he and Gawker operate, and the types of material they publish, Denton said, “I think society has already changed, and the media has already changed,” and that “there’s less demand for the kind of highly critical journalism there was maybe five or 10 years ago.”