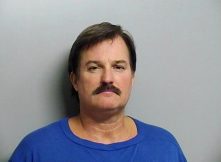 TULSA, Okla. (AP) — A white former police officer is headed for a fourth trial in the killing of his daughter’s black boyfriend, but Shannon Kepler has recently added another racial element to the case: He now says prosecutors can’t try him because he’s a member of an American Indian tribe.

Attorneys for Kepler also argue that the slaying happened on tribal land of the Muscogee (Creek) Nation. If the court agrees, the case could be moved from state to federal court.

The 57-year-old former Tulsa officer is accused of fatally shooting 19-year-old Jeremey Lake in front of a house in 2014 while off-duty.

Kepler does not deny pulling the trigger but told investigators he acted in self-defense because he thought Lake was armed. Police recovered no weapon on Lake or at the scene.

In three previous trials, jurors were unable to reach a verdict, resulting in mistrials. His fourth trial begins Oct. 9.

The case was already playing out in a “charged setting,” said University of Oklahoma law professor Taiawagi Helton. The latest defense requests are like “somebody just threw another gallon of gas on the fire.”

Kepler filed the request Aug. 11, three days after the 10th U.S. Circuit Court of Appeals overturned a death sentence for Patrick Dwayne Murphy, an Oklahoma inmate convicted of a 1999 murder. Murphy successfully argued that his case had to be tried in federal court because of his membership in the same tribe Kepler cites and because the killing happened within the nation’s 11-county jurisdiction.

Both cases could have far-reaching implications for defendants who claim tribal membership, and they have drawn criticism from some members of the tribe.

The Oklahoma attorney general plans to ask the Denver-based appeals court to reconsider its ruling in Murphy’s favor. Meanwhile, Tulsa County District Attorney Steve Kunzweiler said he will probably challenge Kepler’s assertion that he was an enrolled tribal member when he killed Lake.

Kepler claims to be 1/128th Creek, tracing his lineage to the Dawes Rolls, a historical document created by the federal government to determine who was an eligible member of certain tribes. The rolls include more than 100,000 names. Most of those on the list were accepted between 1899 and 1906.

“One of the ugly things about this is that federal law originally talked in terms of race,” Helton said. “But we don’t like talking about race, so we talk about citizenship.”

“If you want to come in and say he’s not Native American, that’s fine,” Kepler’s defense attorney, Richard O’Carroll, told The Associated Press. “He’s got credentials saying he’s Native American. You are what the law says you are.”

Joe Anderson, 37, is one of the 84,000 members of the Creek tribe, the fourth-largest in the U.S. He said he does not appreciate someone “trying to take refuge” with the tribe as a legal tactic.

“When someone does something like that, are they running from something?” Anderson said. “Are they guilty?”

Sam Deere, 57, another tribal member, said Kepler should “go take care of his problems first and (then) he might be accepted with open arms” by the Creeks.

Because the case could affect an untold number of other defendants with tribal blood accused of committing crimes in Indian country, the matter could eventually reach nation’s highest court, said Judith Royster, a law professor at the University of Tulsa School of Law.

If the 10th Circuit decision stands, Royster said, “then you’ve got some interesting questions.”