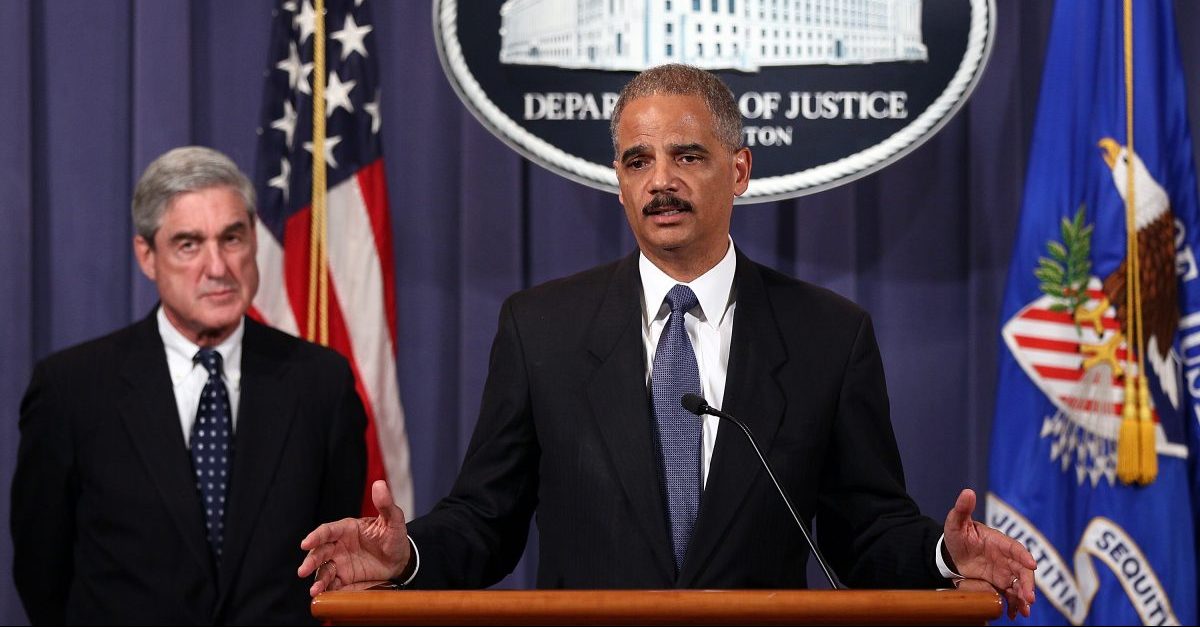 Can a president be indicted while in office? That’s a question that’s come up often enough during President Donald Trump‘s time in office. It’s also a question that has been answered. According to the U.S. Department of Justice, no, a sitting president cannot be indicted. Barack Obama’s former Attorney General Eric Holder addressed his former agency’s logic, however, and came up with a possible loophole.

In a tweet Monday night, Holder posted an opinion piece written by Harvard Law Professor Laurence Tribe that argues that the Constitution allows for indictment. Tribe’s piece was based mainly on the assumption that any president would certainly receive a pardon from their successor, placing them above the law. Holder, on the other hand, took on the problem posed by the DOJ in their 1973 opinion (which was later affirmed by a 2000 opinion), and looked to the Constitution for a solution.

Constitution does not anticipate allowing a president who used fraud to obtain the office to remain in power. Executive branch paralysis during the criminal process is not a compelling argument- consider 25th Amendment. A sitting president can be indicted. https://t.co/zbcjdnJaD6

The main concern expressed by the Department of Justice was that if a president is indicted while in office, it would hamper the executive branch’s ability to function.

“[T]he indictment or criminal prosecution of a sitting President would impermissibly undermine the capacity of the executive branch to perform its constitutionally assigned functions,” the DOJ said in its 2000 memorandum opinion, citing the earlier opinion.

On top of that, the Constitution calls for impeachment and removal as the proper means to deal with presidential “high crimes and misdemeanors,” allowing charges to be filed once they are out of office.

The notion that impeachment is the sole means of addressing presidential crimes has been conventional wisdom, but it has not been definitively determined by the courts. So if—like Holder—one is willing to look past that question, the remaining issue is whether a criminal case would make it too difficult for a president to do their job.

According to Holder, it doesn’t matter.

He points to the 25th Amendment, which has come up a bit during Trump’s presidency by those claiming he is mentally unfit for the job, but that’s not what the 25th Amendment is really about. Sections 3 and 4 of the amendment deal with what happens when the president “is unable to discharge the powers and duties of his office,” even temporarily. While that could mean that the president is too ill—physically or mentally—it is not limited to that situation or any other. Therefore, if a president is too occupied by a criminal case that they cannot run the executive branch, as was the DOJ’s concern, this could fall under the 25th Amendment, which says in Section 3:

If the president isn’t willing to admit that they can’t do the job, Section 4 allows for the Vice President and the cabinet to make the call. Once the case is over, should the president not be convicted, the 25th Amendment allows them to go back to work.

Holder doesn’t get past the hurdle set by those who claim that indictment must wait until after removal or the end of a term, but if a court were to rule that waiting is not required, his suggestion appears to be a way to move forward that would satisfy that DOJ’s main concern.