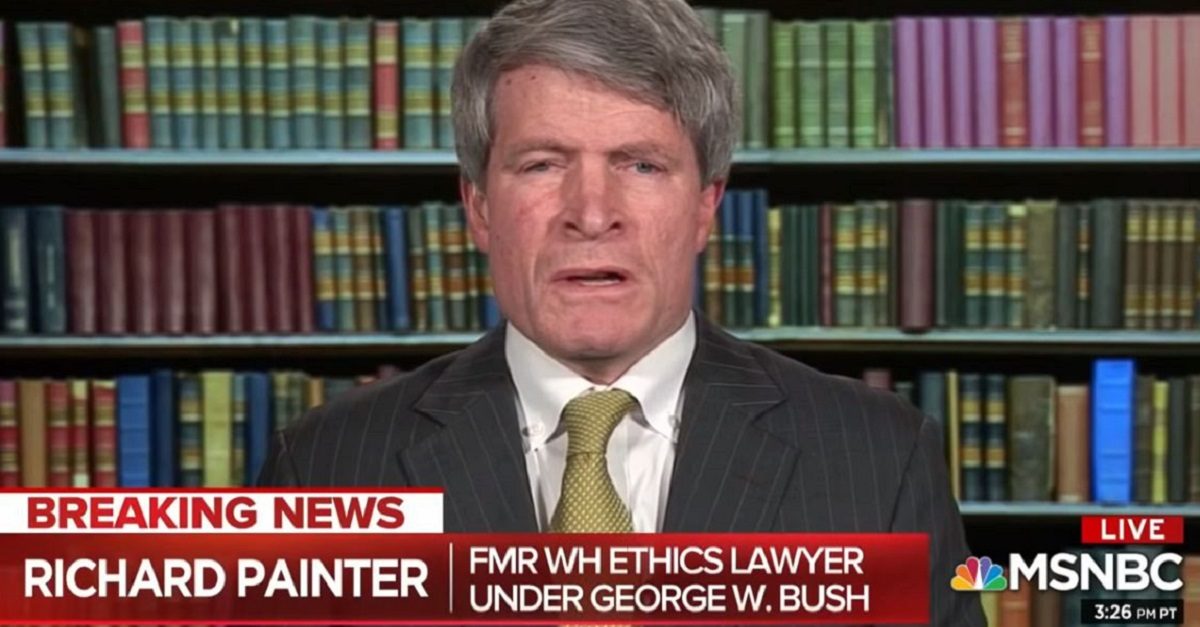 While the claim that Deputy Attorney General Rod Rosenstein suggested removing President Donald Trump from office through the 25th Amendment sparked claims from Trump supporters that an “illegal coup” was being attempted, a former member of President George W. Bush‘s administration continues to say it’s a good idea.

Richard Painter, who served as a White House ethics lawyer during Bush’s presidency, has been frequently citing the 25th Amendment, which allows cabinet members to remove a president from office if they find that he or she is “unable to discharge the powers and duties” of the presidency.

Painter’s main argument for this is based on what he claims is Trump’s mental health. It came up Monday night when he appeared on MSNBC to discuss the current controversy over Trump’s declaration of a national emergency to build a border wall.

The president is not well at all mentally. I think he’s an extreme narcissist. He has been denied what he wants, his wall, and he is having a hissy fit. He is out of control, and he will not take no for an answer from Congress. And he’s going to do this. He is going to insist on doing — he is going to tear the country apart. It’s unconstitutional. It’s illegal. He is going to do enormous damage to the Republican Party which is going to split right down the middle over this, and we really need to keep in mind that this is because the president is not well.

Painter, who is not a psychologist, kept up this narrative on Twitter Tuesday morning.

“The mental illness of @realdonaldtrump is extreme and a danger to our Country,” he said. “It now brings us to an imaginary ‘national emergency’ as well as a real one. The Constitution tells us what to do about it.” The tweet included a link to an opinion piece he wrote in 2017 about using the 25th Amendment.

The mental illness of @realdonaldtrump is extreme and a danger to our Country.
It now brings us to an imaginary “national emergency” as well as a real one.
The Constitution tells us what to do about it.https://t.co/9amoGM3FOM via @NBCNewsTHINK

He then retweeted a message from Trump himself, with the comment, “This is one of hundreds of Tweets that would lead psychiatrists examining this Twitter page to conclude that the author is mentally ill.”

This is one of hundreds of Tweets that would lead psychiatrists examining this Twitter page to conclude that the author is mentally ill. https://t.co/r6ZBnzGvI7

Later in the morning, he posted the message, “Narcissists with nukes. Not a good combination. Amendment 25,” while retweeting a post from frequent Trump-critic George Conway, the husband of White House counselor Kellyanne Conway.

Narcissists with nukes.
Not a good combination.
Amendment 25. https://t.co/0yLUpddVo7

Despite these claims, there have been no medical reports to show that the president is physically or mentally incapable of performing his duties. Harvard Law Professor Emeritus Alan Dershowitz, a frequent defender of Trump, has railed against suggestions of using the 25th Amendment, saying such a thing is meant for when a president is ill, not when people don’t agree with his decisions.