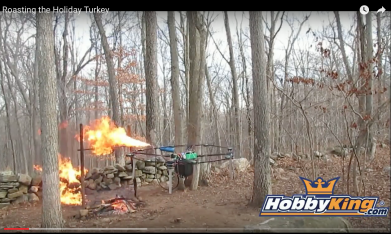 The father and son team that built heavily modified drones equipped with a handgun and a flamethrower are headed to court.

Austin Haughwout, 19, and his father, Bret Haughwout, gained widespread media attention after posting videos of the drones in action on YouTube.  The videos also got the attention of the Federal Aviation Administration (FAA), which issued a subpoena to compel the two men to provide the agency with additional information about the drones.

The Haughwouts are now fighting the subpoena on the grounds that it constitutes an unreasonable search and seizure.  Furthermore, they contend the FAA lacks the authority to regulate the use of recreational drones.

The Haughwouts’ attorney, Mario Cerame, told CBS News that the decision could potentially set an important precedent about the FAA’s power to regulate recreational drone use.

Cerame added, the FAA should not be using airplane regulations to seek information about “a kid playing in his backyard.”

“They shouldn’t use airplane regulations,” Cerame told CBS News.  “They should go get the authority from Congress.  It’s about keeping the government in check as to what Congress said they can do.”

According to court filings, the FAA contends its power to regulate the safe operation of aircraft provides the necessary authority to compel the Haughwouts to provide additional information about the two drones in question.

The FAA further states it is conducting a legitimate investigation into the potential violation of its regulation that provides “[n]o person may operate an aircraft in a careless or reckless manner so as to endanger the life or property of another.”

A hearing on the matter is scheduled for Wednesday before U.S. District Judge Jeffrey Meyer in New Haven, CT.