How Does the Electoral College Work? | Law & Crime

Electoral College Crash Course: Here’s What They Actually Do 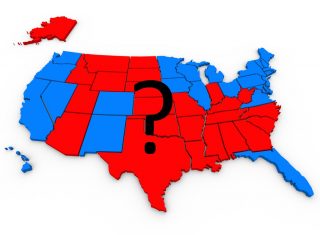 With the general election on Tuesday, American voters will be electing the next President of the United States. Well, more accurately, they will be picking which party’s electors will be representing their state when the Electoral College meets and actually chooses the next President. But how does this work? Who makes up the Electoral College, and what do they do? Here’s a brief rundown:

Each state’s party typically nominates a slate of electors at the state’s party conventions. The group that ends up in the Electoral College is determined by how the state’s citizens vote in the general election. The people on those slates are members of their respective party. For example, in New York, Democratic electors include former President Bill Clinton and Governor Andrew Cuomo. The Republican slate includes Donald Trump Jr. The Constitution says that “no Senator, Representative, or Person holding an Office of Trust or Profit under the United States” can be an elector. Each state has a number of electors equal to their total representation in Congress (House Representatives plus Senators).

What do they do?

First, according to the National Archives and Records Administration, after the general election, each state’s governor (or mayor, in the case of Washington, D.C.) prepares “Certificates of Ascertainment” with a list of the electors chosen by their state and how many votes they received, as well as a list of the other electors who were not chosen in the general election, and how many votes they got. Seven original copies and two certified copies of the certificates are prepared. One original and two certified copies of the Certificate of Ascertainment are then sent to the Archivist of the United States, David S. Ferriero. Ferriero then examines them and passes the copies to the House and Senate.

Then, on December 19, the electors meet in each of their states to choose the next President and Vice President. They record their votes on six original “Certificates of Vote” and send them, paired with the remaining six original copies of the Certificates of Ascertainment, to federal and state officials. The Certificates of Vote have two lists, one for President and one for Vice President, with each list showing every candidate who received an electoral vote and how many (the lists do not show candidates who did not receive electoral votes). The six packages, each containing Certificates of Vote and Ascertainment are then sent to various officials. One is sent to Vice President Joe Biden, as he is President of the Senate, two are sent to Ferriero, two are sent to a given state’s Secretary of State, and one is sent to the Chief Judge of the federal District Court located where the electors meet.

When does all this happen?

As mentioned above, the electors in each state meet on December 19. The deadline for when they need to send their results to the various state and federal officials listed above is December 28. The votes are then counted by a joint session of Congress on January 6 (unless Congress passes a law to change the date). The inauguration of the winner will be on January 20.