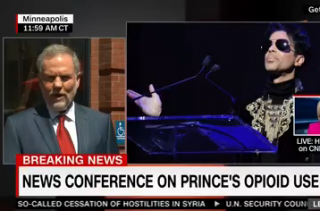 As more information comes to light regarding what happened before and after Prince died on April 21, legal issues have come up as well. William Mauzy, the attorney representing Howard and Andrew Kornfeld, the father and son who acted to treat Prince on what Mauzy called a “life saving mission,” addressed the media on Thursday to discuss controversy surrounding Andrew’s involvement. A criminal investigation into the matter is currently underway, the Minneapolis Star Tribune reported, but that doesn’t mean that law enforcement officials will press charges against anyone.

Mauzy said that the night before Prince died, Dr. Howard Kornfeld received a call regarding an emergency involving Prince, and he booked a flight to arrive in Minnesota two days later. Since he was unable to clear his schedule until then, he sent his son Andrew, who arrived the next morning. Dr. Kornfeld runs the Recovery Without Walls facility, a treatment clinic in California. Andrew, not a doctor, is referred to as a practice consultant on the clinic’s website. Mauzy described Andrew’s duties as meeting with prospective patients. Dr. Kornfeld had contacted a doctor in Minnesota, who Mauzy said prepared to see Prince the next day. Mauzy said that the plan was “to get him stabilized in Minnesota, and convince him to come to Recovery Without Walls.”

When Andrew arrived on the scene and found the music legend unconscious, he called 911. Mauzy told reporters that he did not believe that Andrew provided any treatment himself, although he acknowledged that Andrew did have buprenorphine pills. Andrew turned the pills over to the Carver County Sheriff’s Office, who then interviewed him, along with two others who were present at the scene when Prince died. When asked if he is concerned that Andrew could face criminal charges for possession of the pills, Mauzy said, “I am concerned about that,” but was confident that his client has a defense.

a person, who in good faith seeks medical assistance for another person who is experiencing an alcohol or drug overdose may not be arrested, charged, prosecuted, penalized, or have that person’s property subject to civil forfeiture.

Whether or not Andrew would actually get immunity is not 100% clear. Statutes like Steve’s Law are meant to encourage people present for overdoses to seek help without worrying that they’ll get in trouble for being around the drugs. This case, where Andrew Kornfeld supposedly brought his own drugs that were not the ones that Prince died from, appears to be different. And remember, Andrew isn’t a doctor, so he probably shouldn’t have had the drugs with him in the first place.

But the law also says:

providing first aid or other medical assistance to a person who is experiencing an alcohol or drug overdose may be used as a mitigating factor in a criminal prosecution for which immunity is not provided.

So even if Andrew isn’t totally immune and he is charged, the fact that he was there to provide assistance to a person who was experiencing an overdose would help, especially considering that he supposedly didn’t even use the drugs he had.