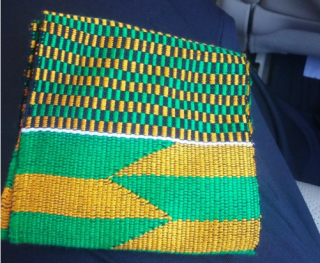 Nyree Holmes, draped the scarf-like kente cloth around his neck over his graduation gown during Friday’s ceremony, and was told to remove it by school officials. The graduation dress code calls for only the cap, gown, and awards.

The kente cloth is a tradition from Holmes’s home country of Ghana. According to Holmes’s Twitter account, he wore the cloth to represent his “blackness.”

@nyreehesr so I wore this thing called a kente cloth (cultural cloth from Ghana) around my neck. That represents my, pic.twitter.com/6SG8NSnBFh

Holmes said that a school official approached him while he was in line for graduation, and asked him to give the cloth to him, but Holmes refused. The official then said Holmes wouldn’t be able to walk in the ceremony with it on. Holmes insisted, saying it was a cultural item, and proceeded to walk in the ceremony and shake hands with the principal. When he walked off the stage, however, three sheriff deputies were waiting for him and escorted him out of the ceremony before he could claim his diploma.

After being held by the deputies, Holmes wrote, he was eventually able to go back inside through the exit with a security guard to get his diploma.

The school is reportedly reevaluating their dress code after this incident. A school district representative told KGO-TV, regarding the use of law enforcement, “Things could have been handled differently, if we had perhaps more personnel.” Despite the use of deputies, there are no charges facing Holmes.