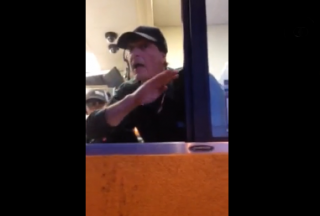 A New Jersey woman is suing Taco Bell, claiming she had difficulty being served at the drive-thru window at two locations because she is deaf. Gina Cirrincione claims that in January, she drove up to a Taco Bell in Pleasantville, New Jersey, and handed a slip of paper with her order to an employee at the pick-up window. She claims in her lawsuit that the manager “berated [her] for utilizing the drive through and for placing her order at the “pick-up” window.” The manager then told Cirrincione that he would accommodate her that one time, but that in the future she would have to go inside the restaurant to order.

Video of this incident can be seen below:

In March, Cirrincione allegedly had more trouble, this time at an Atlantic City location. She claims that this time, no one even spoke to her. The lawsuit says that after she handed a piece of paper with her order to an employee at the pick-up window, the worker then slid the note back to her and shut the window.

Cirrincione, who is represented by the law firm Eisenberg & Baum, claims that the drive-thru ordering system is inaccessible to deaf people because it requires hearing and speaking. The complaint states that her primary means of communication is American Sign Language. She claims that Taco Bell discriminated against her, in violation of the Americans with Disabilities Act and the New Jersey Law Against Discrimination. She is seeking monetary damages, and for Taco Bell to institute policies that would prohibit discrimination against people who are deaf or hard of hearing in the future.

Update 7/14/16 1:52pm: A representative from Taco Bell has provided LawNewz.com with the following statement:

We have not yet been served with the lawsuit, so we cannot comment at this time.  However, Taco Bell has a fundamental policy to respect all of our customers and employees, and we are committed to maintaining an environment free of discrimination or harassment.  We do not tolerate discrimination in any form, and we have a strong policy to provide accessible service to all of our customers and fans.