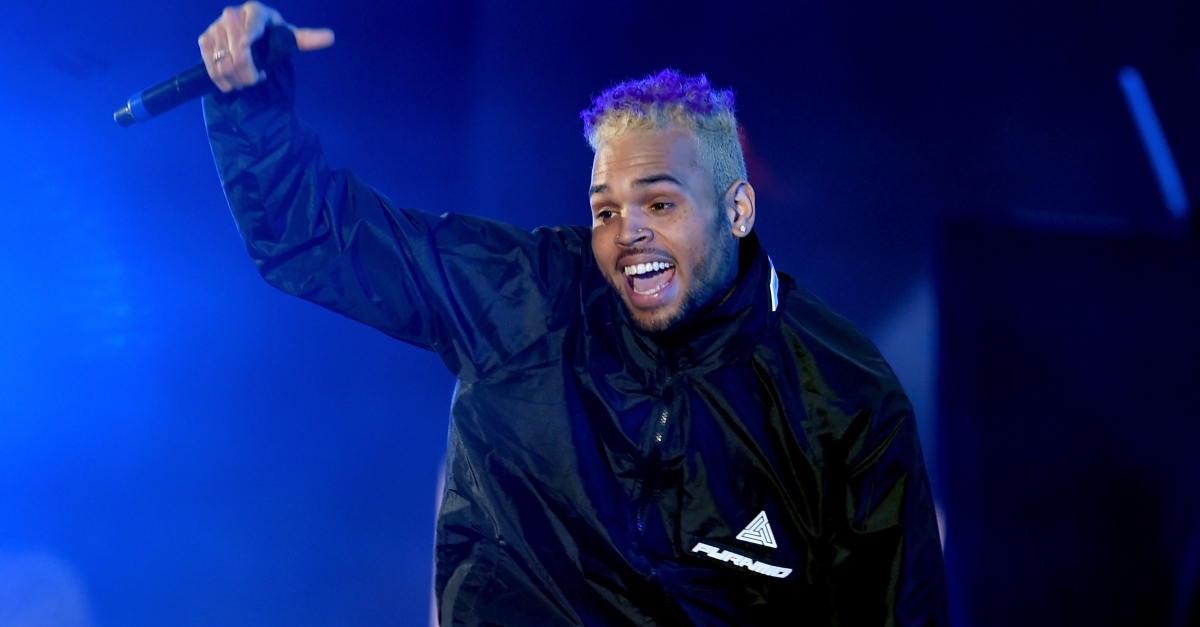 R&B singer Chris Brown was charged Thursday with illegally owning a monkey, according to the Los Angeles Times.

Brown faces six months in jail and a $1,000 fine.  The case stems from his alleged possession of a capuchin monkey named Fiji. An Instagram post posted December 2017 showed his daughter holding the animal.

An attorney for Brown did not immediately return a Law&Crime request for comment. Brown denies the allegation, according to a TMZ report that cited sources “close” to the singer. He reportedly said the video wasn’t taken in Los Angeles, where he lives, but at a relative’s home in Las Vegas. That family member actually owns Fiji, he insisted.

Investigators said they didn’t immediately know where the monkey came from. Officials with the California Department of Fish and Wildlife moved Fiji to a wildlife sanctuary.

Brown had been in and out of courts for years since his infamous 2009 attack on then-girlfriend Robyn Rihanna Fenty. He pleaded guilty and was sentenced to probation, community service, and domestic violence counseling.

Since then, police have surrounded his home after a beauty queen accusing him of threatening her with a gun, he was arrested over an alleged assault on a photographer at night club, he was sued for allegedly attacking a woman for trying to take a picture of him (that was settled, and he never faced charges), and he was sued for the alleged sexual assault of a woman at his home.

Brown, a prolific Instagram user, didn’t address the monkey allegations on the site, but his account posted a heck of a post that seemed to reference his persistent personal problems.

“One day they will make a movie about this kid, saying how he was one of the greats and stared adversity in the eyes and stood tall no matter what they threw at him,” said the post, which alternated between the third-, and first-person. “HE MADE MUSIC THAT MATTERED AND HELPED SO MANY PEOPLE BELIEVE IN THEIR ABILITIES TO MANIFEST THEIR OWN DESTINY. it’s pretty sad that all these things will be recognized when IM GONE! [Heart emoji.] BUT FOR NOW, IMA REMAIN HUMBLE/CREATIVE (MYSelf) And ultimately elevate my CONSCIOUSNESS.”

Brown is scheduled in court on February 6 for his arraignment.