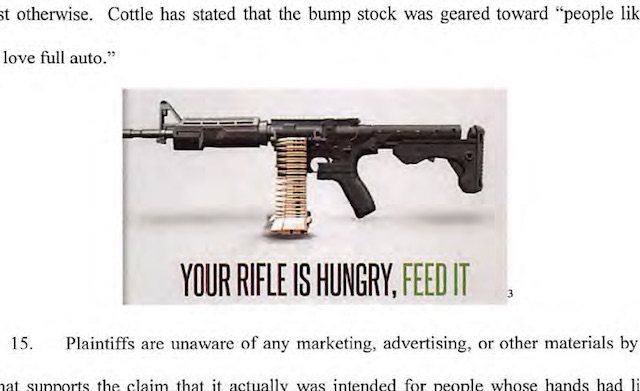 Manufacturers of the recoil capture devices known as “bump stocks” have been slapped with a class action lawsuit by three people who witnessed the carnage unfold during the Mandalay Bay Massacre in Las Vegas on October 1.

Plaintiffs Devon Prescott, Brooke Freeman, and Tasaneeporn Upright are suing individually and as members of an anticipated class, who claim they “tragically suffered emotional distress as a result of the shooting that occurred during the Route 91 Harvest Music Festival.” The lawsuit goes on:

This horrific assault did not occur, could not occur, and would not have occurred with a conventional handgun, rifle, or shotgun, of the sort used by law-abiding responsible gun owners for hunting or self-defense. The damage caused to Plaintiffs resulted from the military-style arsenal that Defendants manufactured, marketed, and sold to the general public, without any reasonable measures or safeguards, and which the killer foreseeably used to such horrific results.

The “military-style arsenal” referenced in the lawsuit refers to the aforementioned bump stock devices. Alleged gunman Stephen Paddock is believed to have used bump stocks in order to increase the rapid-fire capability of some of the guns used during the shooting.

A bump stock is a third-party gun accessory which can replace the factory stock and grip of an assault rifle. The device operates by capturing a firearm’s natural recoil, thus allowing a user to continuously fire as the trigger is repeatedly bumped back against their firing finger.

Slide Fire Solutions claimed that their bump stock device was originally developed in order to assist “persons whose hands have limited mobility,” according to the letter the company submitted to the Obama-era ATF.

The lawsuit contends, however, that Slide Fire Solutions knew their bump stock device would be used for other purposes and that the company marketed their devices toward gun enthusiasts who wanted their weapons to fire at or near fully-automatic speed.

Included in the lawsuit is an image of a Slide Fire Solutions advertisement which depicts an assault rifle and ammunition belt above the caption, “YOUR RIFLE IS HUNGRY, FEED IT.” The lawsuit also notes:

Jeremiah Cottle, Slide Fire’s inventor of bump stocks…has stated that the bump stock was geared toward “people like me, [who] love full auto.” Plaintiffs are unaware of any marketing, advertising, or other materials by Slide Fire that supports the claim that it actually was intended for people whose hands had limited mobility.

The plaintiffs are also suing other unnamed bump stock manufacturers. Beyond the class action certification, the aggrieved parties are seeking the establishment of a court supervised medical-and-psychological-monitoring program for all class members to be paid for by the defendants, attorney’s fees, court costs, and punitive damages.

LawNewz reached out to Slide Fire Solutions for comment via Twitter as the “Contact” page on their website is currently completely blank. No response was forthcoming at the time of publication. This post will be updated if and when the company replies.