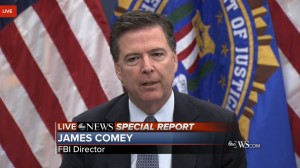 Could this be the press conference where we learn of Hillary Clinton‘s fate?

Just three days after completing a highly-publicized 3.5 hour interview with the former Secretary of State, the FBI is prepared to give a press conference this morning. FBI Director James Comey is scheduled to give the remarks at 11 a.m., which are on an unspecific topic.

Last week, Attorney General Loretta Lynch announced that she was prepared to receive the recommendation from the FBI about the investigation into Clinton’s use of a private email server and the handling of classified information.

Political Twitter immediately wagered their best bets about the press conference and what we might expect to hear when Comey takes to the microphone. Many are pointing to the fact that Clinton is scheduled to make her first campaign stop later today alongside President Barack Obama as a likely indicator about how Comey’s remarks may be colored:

FBI’s Comey speaks to the press at 11 am. Obama/Clinton do their first joint campaign rally at 2:25 pm.

Anyone think that Obama would be there if Comey was going to say anything upsetting? https://t.co/EMoyvLOE3y

Headed soon to @FBI where Director James Comey plans to make a public statement at 11am EST. No topic provided in advance.

Just remember that Comey is a Republican who nearly resigned over warrantless wiretaps. There’s no fix.

Focus is unknown, but FBI interviewed Clinton this weekend.

FBI Director Comey speaks to the press 11a ET. Obama/HRC campaign together 2:30p ET. Pretty much says it all.

Prediction: Comey says the investigation is continuing, that nothing corrupt has happened, that Hillary answered all questions.