Bill Would Make It Legal to Run Over Protesters ‘Unintentionally’ 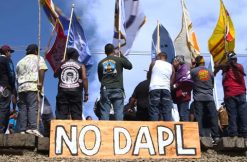 North Dakota lawmakers recently introduced a bill that’d legalize running over protesters, as long as it’s an accident. Safe to say, it won’t find many supporters from anti-DAPL activists.

“Notwithstanding any other provision of law, a driver of a motor vehicle who unintentionally causes injury or death to an individual obstructing vehicular traffic on a public road, street, or highway is not guilty of an offense,” states House Bill Number 1203.

“[The roads are] not there for the protesters,” he told The Bismarck Tribune in a Wednesday report. “They’re intentionally putting themselves in danger.” He said the bill would shift the “burden of proof” from the driver onto the pedestrian.

If passed, the bill might affect the ongoing protests against the Dakota Access Pipeline. Protesters with the Standing Rock Indian Reservation, which straddles North Dakota’s border with South Dakota, say the project might contaminate their local water source, the Missouri River. Another North Dakota bill would criminalize wearing masks at protests. Demonstrations have turned violent from time to time.