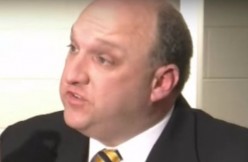 An atheist group has reached a settlement in a First Amendment lawsuit over a sheriff’s religious-themed Facebook post. Now the organization, American Atheists, will get $15,000 while $26,000 will go to plaintiffs Joshua Stevens and Jane Doe.

From the group’s statement published on Thursday:

This is the result of a lawsuit filed in May against Bradley County, Tennessee and the sheriff.

Bradley County Sheriff Eric Watson had posted a religious-themed message on the sheriff office’s Facebook page, and American Atheists sent him a letter for making a religious message on a government-sponsored page.

“I respect the right of others to believe as they so choose, but my personal faith in Christ is absolute,” Watson told The Cleveland Daily Banner in an April report. “I will not alter or change my faith for any reason.”

According to the group, people started complaining about Watson’s actions on the Facebook page, but their posts were deleted and blocked. Meanwhile, pro-sheriff comments were left online. Cue lawsuit.