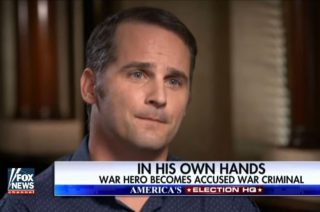 A U.S. Army Major who was previously under investigation now finds himself the subject of a renewed probe, after admitting on national television to killing a Taliban suspect he was supposed to release. During an interview with Fox News’ Brett Baier, Maj. Matt Golsteyn discussed his situation in Afghanistan in 2010, and admitted to killing an unarmed man.

Golsteyn’s target was a suspected bomb maker who refused to answer questions while he was detained. According to Army rules of engagement, he had to be released. But Golsteyn was worried about what the suspected enemy fighter might do once he got out. His fear was that the suspect would target civilians who were assisting American forces. Army documents obtained by The Washington Post showed that a local tribal leader who was helping U.S. forces was afraid that the detainee knew who identified him as a Taliban fighter. He feared that once released, the suspect would kill him and his family. “It is an inevitable outcome that people who are cooperating with coalition forces, when identified, will suffer some terrible torture or be killed,” Golsteyn explained to Baier.

Fearing that the man would hurt innocent civilians, Golsteyn killed him. “We were told that protecting the civilian population was priority number one, even at the cost of our own lives,” he said. “I did that.”

Golsteyn already admitted doing this during a polygraph test that he took in 2011 while applying for a position with the CIA. An investigation followed, and Golsteyn was accused of murder and conspiracy. The case was later closed without Golsteyn being convicted of any crime. He did not get the CIA job, he was removed from his Special Forces team, and the Silver Star he had earned was revoked. The panel that conducted the probe recommended an honorable discharge, but found that Golsteyn exhibited behavior unbecoming an officer.

But after Golsteyn’s discussion of the incident on Fox, which aired in November, a new investigation is underway. Army spokeswoman Lt. Col. Jennifer Johnson told the Post she would not discuss the matter, saying it was “inappropriate to comment further regarding an ongoing investigation.”

Discussing the new investigation, Golsteyn told Fox News, “We hashed all of this out with the Army a year and a half ago. I don’t have anything that I am ashamed of.”