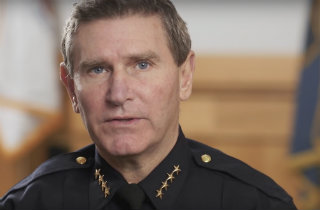 The International Association of Chiefs of Police (IACP) is holding their convention, and on Monday, they delivered something of a surprise in the form of a statement from Terrence M. Cunningham, who is both the Wellesley, Massachusetts Police Chief and IACP President. Cunningham issued an apology “for the actions of the past and the role that our profession has played in society’s historical mistreatment of communities of color.” The full text of the statement was released on the IACP website.

“There have been times when law enforcement officers, because of the laws enacted by federal, state, and local governments, have been the face of oppression for far too many of our fellow citizens,” the statement reads. “In the past, the laws adopted by our society have required police officers to perform many unpalatable tasks, such as ensuring legalized discrimination or even denying the basic rights of citizenship to many of our fellow Americans.”

Cunningham goes on to explain that “this dark side of our shared history has created a multigenerational—almost inherited—mistrust between many communities of color and their law enforcement agencies,” with white officers often not understanding why that mistrust would exist. “As a result, they are often unable to bridge this gap and connect with some segments of their communities,” he said. With that in mind, and wanting “to build a shared understanding,” he and the IACP issued their apology.

That said, Cunningham’s statement continued, arguably passing the buck on the concept of current police offices having racial biases. “[T]hose who denounce the police must also acknowledge that today’s officers are not to blame for the injustices of the past,” he said. “If either side in this debate fails to acknowledge these fundamental truths, we will be unlikely to move past them.”