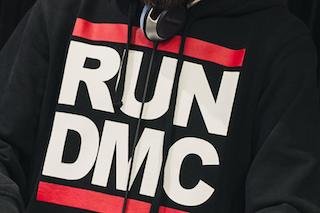 Legendary rap trio Run-DMC has spotted a number of what they say are unauthorized items bearing their name on major shopping websites, and they’re not not happy. On Thursday, they filed a federal lawsuit in the Southern District of New York against Amazon, Walmart, Jet.com, two different third party sellers using those three websites, and numerous “John Doe” defendants. The complaint alleges numerous violations of federal trademark laws and asks for $50 million in damages.

The complaint explains that Run-DMC is suing over not just bootleg items bearing their iconic logo and photos of them, but also eyeglasses, hats, and gold chains purporting to be in the same style as those that DMC (Darryl McDaniels) is synonymous with. They allege that in allowing listings by and splitting profits with third party bootleggers, both the vendors and the larger companies whose portals they sell through are “confus[ing] the public as to the source of origin and endorsement of its products.”

In addition to the request for $50 million in damagers, Run-DMC is asking for interest, attorneys fees, an injunction blocking the use of the Run-DMC name/logo, and “any other relief this Court deems just and equitable.”At least as of this writing, some of the items cited in the exhibits to the complaint are still listed on Amazon.