Not Only is Janet Jackson Not Banned from Super Bowl, CBS Wasn’t Even Punished for ‘Nipplegate’ | Law & Crime

Not Only is Janet Jackson Not Banned from Super Bowl, CBS Wasn’t Even Punished for ‘Nipplegate’ 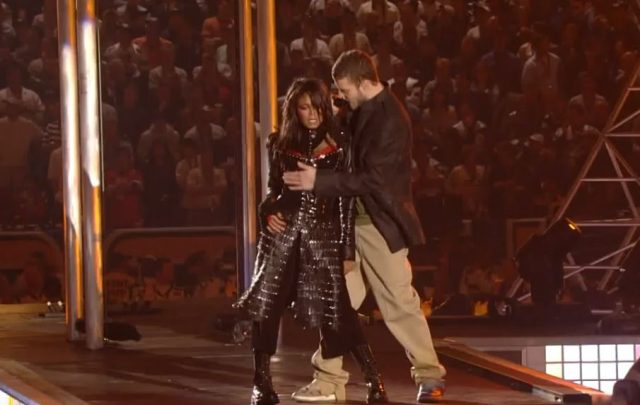 In light of the recent announcement that Justin Timberlake will be performing at the next Super Bowl halftime show, speculation is running wild that Janet Jackson could appear as a guest, as a nod to the infamous 2004 “Nipplegate” performance, which ended with the former *NSync singer pulling off part of Jackson’s top, revealing her breast on live broadcast television. Everyone remembers the controversy that ensued, but what you may not realize is that no one involved really suffered any real consequences.

Already today, reports of Jackson being banned from the big game have been shown to be greatly exaggerated. While the NFL is not saying whether or not Jackson might appear, they did say she’s not “banned” from doing so.

Timberlake, who committed the action involved in that show, is clearly allowed back, as he’ll be performing at the game on February 4, 2018. Reactions from the public and media also more or less spared him at the time.

CBS, on the other hand, did deal with a years-long legal battle with the FCC, but also ended up in the clear. The FCC tried to impose a $550,000 fine against the network for airing “indecent” material in prime time, something that is generally prohibited. However, the Third Circuit Court of Appeals ruled in 2008 that the fine went against previous decisions, which did not punish “fleeting” indecency, such as the brief glimpse of Jackson’s nipple.

In 2009, however, the Supreme Court held in a separate case that an FCC rule that banned “fleeting expletives” during live broadcasts (like a celebrity using a curse word during an awards show) was okay. So when the CBS matter reached the top court, they sent it back to the Third Circuit to review it in light of that development. Turns out, the court wasn’t moved by the expletive decision, because the FCC had made that rule in advance and gave notice of the new policy. They never declared any new policy before Nipplegate, so fleeting indecency was still allowed at the time.

With that, the hefty fine was gone. Of course, by then it was 2012, eight years after the incident, and the public wasn’t exactly paying attention anymore.

So what about now? Well, it’s not totally clear, but if Jackson did show up and reveal the other nipple, there’s a chance everyone involved could get away with it again. The dismissal of CBS’ fine wasn’t the only thing that happened in 2012. The FCC also lost a case against Fox for fleeting indecency, also due to a lack of sufficient prior notice of a rule change. Since then, the agency has been less aggressive on such matters.

LawNewz reached out to FCC officials for comment on the current state of their indecency policy and whether a hypothetical Nipplegate II would be a violation. We will update should they respond.