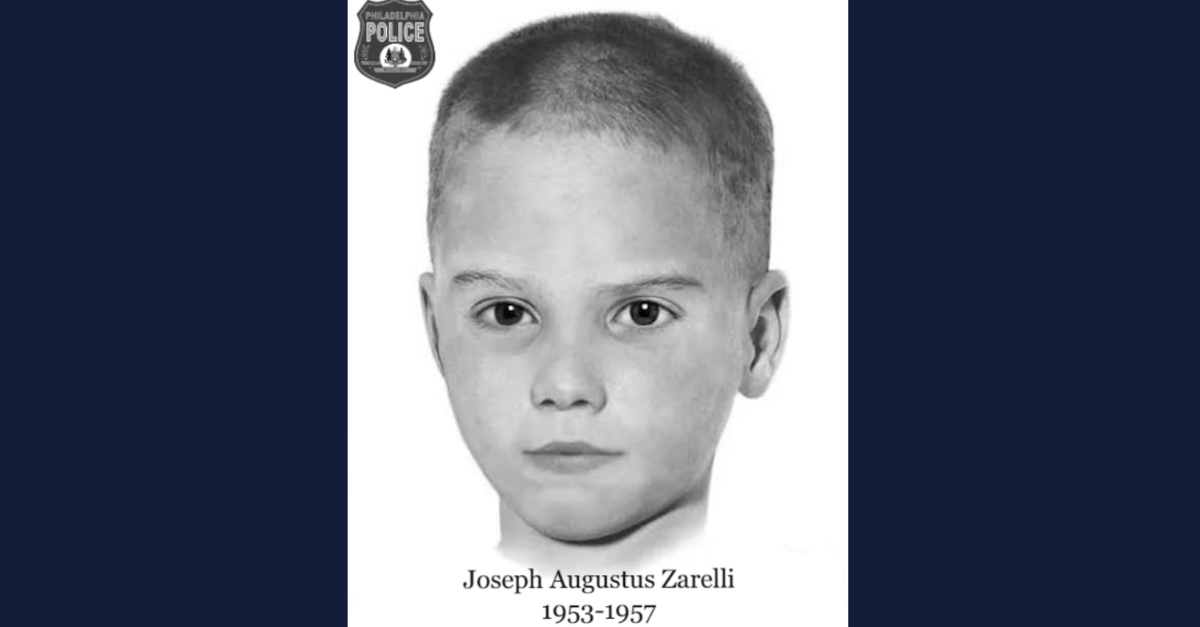 Joseph Augustus Zarelli. Police are still trying to figure out who killed him and dumped his body in a box along as Philadelphia road in 1957.

After more than six decades, Philadelphia police identified a young homicide victim who was found dead in a cardboard box. The child, long known as only the “Boy in the Box” or “America’s Unknown Child,” has been revealed to be 4-year-old Joseph Augustus Zarelli.

That clears up one tragic mystery, but it does not solve how he wound up beaten in a box along Philly’s Susquehanna Road on Feb. 25, 1957.

“Despite persistent efforts by law enforcement agencies and partners, as well as international public interest in the case, his identity remained unknown for more than six decades,” cops said.

The question is who killed Zarelli.

“In homicide cases such as this, extreme difficulty lies in the fact that rarely can they be resolved, and the offender ultimately brought to justice, until the victim is first identified,” said police Captain Jason Smith.

Speaking at a press conference on Thursday, Smith said police have suspicions about who killed Zarelli, but it was irresponsible to share those suspicions during the ongoing investigation. He declined to release the names of the child’s parents, citing respect for the boy’s living siblings.

…call 215-686-TIPS(8477). As with all homicides, there is a standing $20k reward for information that leads to the arrest and conviction of a suspect. We will NEVER stop seeking justice for victims. pic.twitter.com/KZZDDQixoB

In describing Zarelli’s condition, city Police Commissioner Danielle Outlaw said he appeared malnourished. His body bore the signs of recent and past trauma.

“In his very short life, it was apparent that this child experienced horrors that no one, no one, should ever be subjected to,” she said.

To discover identity, police went as far as to release pictures of the child taken at the time of autopsy. This was publicized. No one stepped forward.

Authorities said Zarelli was exhumed in 2019 to get material for additional DNA studies, authorities said. They were able to track down relatives using genetic genealogy, they said.

“Throughout this investigation, the Office of Forensic Science has performed, consulted on, or coordinated the forensic work that has been performed on this case,” said Forensic Laboratory Manager Ryan Gallagher.

“For sixty-five years, the story of America’s Unknown child has haunted this community, the Philadelphia Police Department, our nation, and the world,” Outlaw said. “Despite the fact that Joseph Augustus Zarelli’s entire identity and rightful claim to his own existence was taken away, he has never been forgotten. This case brings hope that there will never again be an unidentified victim of homicide in the City of Philadelphia. I am grateful to the investigators, scientists, and medical personnel who worked so tirelessly on this case.”

Zarelli’s death remains under investigation as a homicide. Cops ask that anyone with information call Detective Robert Hesser at 215-686-3334. You can also call or text the tipline at 215-686-TIPS [8744]. There is a $20,000 reward for information leading to an arrest and conviction.