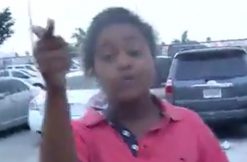 One thing on top of another. On Wednesday, Miami woman Samantha Martinez, 20, was just leaving jail after being arrested for faking a kidnapping. That’s when an NBC 6 team met her in the parking lot for an interview. Things, as they say, escalated.

11PM: We speak with the boyfriend of the woman who attacked an @NBC6 photog & allegedly faked her own abduction to get revenge on him. pic.twitter.com/VS9xU5epKJ

Here’s the same incident from another angle. The man seen trying to restrain her is her boyfriend, who remains unidentified in reports.

#BREAKING: Woman accused of faking her own abduction to get back at a boyfriend attacks an @NBC6 photographer after getting out of jail. pic.twitter.com/zrQ3V2gl9y

And this one shows her being arrested. The NBC 6 team claimed she’d thrown a rock at anther TV crew. Seems like she didn’t want to speak to reporters.

#BREAKING: She also fought with her boyfriend (who reported her abduction) & threw a rock at another TV crew. She’s now in cuffs. @NBC6 pic.twitter.com/sranSe3rxl

That morning, the Miami Police Department had announced that they arrested Martinez for faking the abduction.

UPDATE: We have arrested Samantha Martinez after she came forward and admitted she faked her abduction as revenge on her boyfriend. https://t.co/RQvYXHQWkm

He’d allegedly cheated on her, so she hid out at a friend’s house, and texted him demands for a ransom, police said. Ostensibly, the “kidnapper” had commandeered her phone. It went as far as her allegedly sending a phone message of her crying.

The news team involved in the parking lot incident declined to press charges, so she was let go, but as for the kidnapping thing, she’ll need to go to court on Tuesday.

Her boyfriend told NBC 6 that he plans on staying with her.

“I changed my life,” he said. “And people change too.”