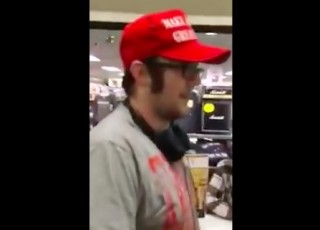 Video posted to social media shows a college student getting into an argument over his pro-Trump hat. It happened in Canada.

CBS News reports that a student, Matt Linder, a student at Mount Royal University was walking around with his “Make American Great Again” hat. He was confronted on campus by Zoe Slusar, the former vice president of student life for the school. She said the slogan was “hate language.”

“You just said he doesn’t like immigrants,” Linder later stated. “His wife’s an immigrant. It’s illegal immigrants he doesn’t want.”

Slusar threatened to write the university President David Docherty about this since according to her, Linder had worn the hat on campus before.

Oh, and the footage ends with some guy tearing the hat from Linder’s head. It’s a hot mess.

You can see the full video here:

“He is allowed to wear the hat,” Slusar later wrote to CBC News. “As a student, I disagree with what the hat represents. I have diverse friends (culturally and sexually) who would drop a class if the person wearing the hat was sitting in the room with them, because they would feel unsafe. Given the deeper issues of intolerance and oppression represented by the hat, I disagree with it.”

The university declined to comment on the incident, though.

Generally speaking, Section 2 of the Canadian Charter of Rights and Freedoms allows for free speech.