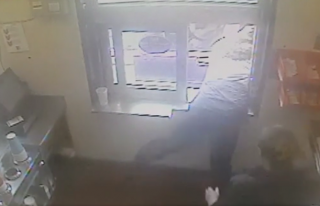 Customers at a Wendy’s in Independence, Missouri attacked a pregnant employee at the drive-thru window Sunday afternoon, WDAF reported. Security video, released by police on Tuesday and shared by the Kansas City Star, shows the inside of the fast food restaurant, where Victoria Repine, 19, appeared to be dragged partially out of the window during an altercation before a coworker kept her inside. Repine can then be seen climbing out of the window on her own.

Repine’s mother, Heather Salcedo, told WDAF that the fight was over drinking straws. She said when her daughter went to the window, one woman was standing outside of a vehicle and said she and her friends didn’t get straws. Before Repine could finish saying that the straws were in the bag, the woman started pulling her out of the window, while another woman attacked her, Salcedo said.

Salcedo says her daughter was pulled outside the window, although the security footage seems to show that she climbed out after initially being pulled. Once she was outside, Salcedo said, the two women and a man punched and kicked her.

Repine is the mother of a 1-year-old, and is three months pregnant with her second child.  Repine herself suffered severe head trauma, black eyes, and scrapes on her face, according to WDAF.

We are shocked and saddened over what happened Sunday afternoon at our 40 Highway restaurant. Our thoughts and prayers are with our restaurant team member. We are cooperating fully with local law enforcement authorities and their investigation. We cannot provide additional details at this time because we do not want to jeopardize their investigation. We are working with our team to help them get through this difficult situation.