Man Threw Batarang So Hard It Got ‘Embedded’ in Police SUV 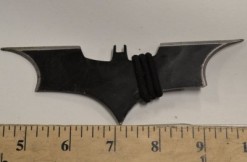 This is random: A 23-year-old man in Seattle, Washington allegedly threw a Batarang at police. In case you don’t read Batman comics, a “Batarang” is a throwing star shaped like the Caped Crusader’s iconic symbol. It’s what he uses for long-range fights instead of guns.

In a statement released Wednesday, police said they were called to a bar after the man “reportedly swung [an] improvised spear” at a bouncer. The man fled, and officers gave chase. He allegedly threw something at a police SUV, and investigators later discovered the Batarang “embedded in the lower front end of a patrol SUV.”

The man has been booked into the King County Jail for felony assault. Police also recommend other weapons and obstruction charges.

The Seattle Police Department have confirmed that he is not the real Batman.

The source of the Batarang remains unclear. LawNewz.com has been unable to reach Batman as of press time. We will update the story if we do.

[image via The Seattle Police Department]
–