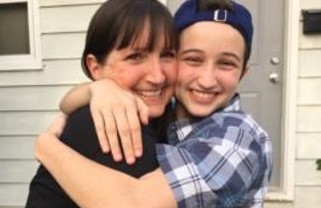 From the lawsuit, filed in United States District Court Eastern District of Wisconsin:

Defendants Kenosha Unified School District No. 1 Board of Education (the “Board”), Superintendent Sue Savaglio-Jarvis, and their agents, employees, and representatives, have repeatedly refused to recognize or respect A.W.’s gender identity and have taken a series of discriminatory and highly stigmatizing actions against him based on his sex, gender identity, and transgender status.

Whitaker claimed school officials made him use the girls’ restrooms (he was assigned female at birth), referred to him with female pronouns, “instructed guidance counselors to issue bright green wristbands” to him and other trans students to more easily keep tabs on their restroom usage, and ostracized him in other ways. This included keeping him from running for prom king even though he’d been nominated. (Whitaker got a legit chance to run after receiving 6,000 signatures on a MoveOn.Org petition.) As for the wristband policy, he said it would be instituted next school year.

Lawyers wrote that the school district’s actions violated Title IX, and the Fourteen Amendment’s Equal Protection Clause. Now they are demanding injunctions on officials’ alleged behavior, and want school officials “to treat him as a boy in all respects” until the lawsuit is resolved, or he leaves school. They also want the school district to stop any discrimination against transgender students.

According to the lawsuit, Whitaker was inspired by a similar story  covered by LawNewz.com.  Gavin Grimm, a Virginia transgender student, sued his own school district for the right to use the boy’s restroom:

Update — July 22, 9:41 a.m. EST: The Kenosha Unified School District responded to our request for comment. They say the wristband claim, and other discrimination allegations are “patently false.”

Kenosha Unified was recently made aware of the lawsuit filed against the District alleging discrimination against a transgender student. The District and its legal counsel are reviewing the complaint and all of the allegations asserted in the complaint. Even a cursory review of the complaint shows that some of the factual allegations are patently false. The District does not have a practice or policy requiring any student to wear a wristband for monitoring any purpose or for any reason whatsoever. The District has worked diligently with transgendered students and their families to address their unique needs and accommodations, including the family named in the suit.

Kenosha Unified’s attorney, Ron Stadler, said, “The District is confident that when the litigation process establishes accurate facts and applies them to the proper legal standards its policies and practices will be found to be in total compliance with all laws.”