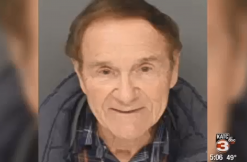 An alleged child molester was arrested Monday, but this story isn’t typical. First off, he was on the run for 37 years. Second, he used to host a kids show.

Frank John Selas, 76, was the face of Mr. Wonder, a show aired on local Louisiana television.  Authorities have been looking for him since 1979 after they say he molested several children on a camping trip at Kisatchie National Forest.

Officials say his car was found in Texas soon after he fled police. According to authorities, he initially hid in Rio de Janiero, Brazil. More investigating revealed other molestation allegations from when Selas worked at a Tokyo, Japan school in the early 70s.

Despite his international escape, he reportedly returned to the U.S. in the 80s. And live in four different states without being caught  including Bonita, California; Chicago, Illinois; South Royalton, Vermont; and even his hometown of Darien, Connecticut.

Investigators eventually learned that he’d changed his last name to Szeles to avoid detection.  They also learned that he and his wife, Maria Szeles, were living in San Diego, California. Cops swarmed his home Monday evening, ending his long run.

He’s currently at the San Diego County Detention Center, awaiting extradition to Louisiana to face two counts of obscene behavior with a juvenile. More charges might be pending thanks to his time as fugitive.