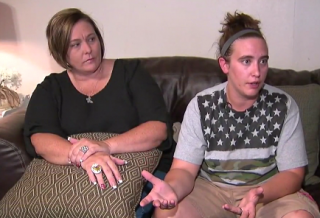 A clerical error resulted in a Texas couple having angry neighbors yelling outside their home, after postcards went out saying that a sex offender lived there. The notices, sent out by the Texas Department of Public Safety, went out to residents within a four block radius of the house where Michelle Swindle and her partner Ashli Sanders live, CBS DFW reported. It turns out that Garon Hedric, who is a registered sex offender, lived there years ago.

Police in Rowlett, Texas claim that Hedric had notified them in June that he was moving back. According to CBS, Hedric has had the wrong address listed since June 2015, but Rowlett Police spokesperson Detective Cruz Hernandez denied this. “This is a first for Rowlett, for a sex offender to provide wrong information, false information,” Hernandez told the TV station.

Police said that Hedric had been reclassified as “high-risk,” which is why the postcards went out in the first place. To correct the mistake, the Department of Public Safety will issue new postcards at the city’s expense, and online records have been changed.

Maybe now, neighbors will stop harassing Swindle and Sanders. Sanders described jeers outside their home from “[p]eople that just yell stuff outside the window, like ‘evil people’ or ‘sex offender.” Swindle said, “It’s been a nightmare, and I want it to be over.”