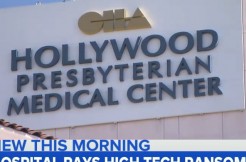 The computers of Hollywood Presbyterian Medical Center were allegedly hacked starting Feb. 5, with its network hidden behind a digital decryption wall. Hospital workers couldn’t break through it, but the hackers promised to take it down—if paid.

“The quickest and most efficient way to restore our systems and administrative functions was to pay the ransom and obtain the decryption key,” said CEO Allen Stefanek, according to the Associated Press. “In the best interest of restoring normal operations, we did this.”

Hackers were paid in 40 bitcoins, which amounted to $16,664. This sort of digital currency is hard to trace. Though invented in 2008 in context of the Great Recession and fears of unstable government money, it has also been used by people who want to get paid online for less-than-legal activities. Like in this case.

The FBI is checking this out, and said in a statement, “we are investigating the compromise with partners at LAPD to determine the person or group responsible.” So, basically, investigators are keeping pretty quiet for now.