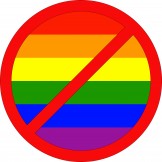 A First Amendment battle is brewing at a California high school over students wearing anti-gay ID badges on their clothing. At Shadow Hills High School, a handful of students are reportedly adorning their street clothes with two-inch wide rainbow pins with a red circle and line—synonymous with “anti”—crossing out the the symbol of the LGBT social movement.

While the optics of the students’ homophobic expression is troubling to peers and staff alike, school administrators don’t believe they can compel the students to remove the pins citing freedom of speech protections.

An administration email sent to Shadow Hills staff confirmed the school’s First Amendment fears. “After consulting with district level personnel and our legal counsel, it was determined that these students do have the protected right to freedom of speech, just as students portraying rainbows in support of the LGBT would,” they said.

However, the email was explicit in drawing distinctions between exercising free speech and creating a hostile school environment:

If at any point students are interrupting class time to express their beliefs, they are to be sent to the discipline office with a referral for disruption… We all have a right to freedom of speech, but students also have a right to be educated without fear. This has always been our policy, and we will continue to enforce it.

In spite of the freedom of speech interests, many students and staff believe that the LGBT community, as a targeted group or minority group, is not sufficiently protected.

Amy Oberman, an AP U.S. History teacher at Shadow Hills, compared placing an anti-gay badge on the window of the Gay Straight Alliance coordinator’s classroom to placing a swastika on the window of a jewish teacher. “Yes, there is freedom of speech established by Tinker, but at least in my view, it’s a hate crime because a group was targeted,” Oberman said. “I’m Jewish, and if that had been a little swastika on my window, what’s the difference?”

In 1969, the Supreme Court decided Tinker v. Des Moines. Justice Abe Fortas famously ruled that students do not “shed their constitutional rights to freedom of speech or expression at the schoolhouse gate.”

It’s important to keep in mind that free speech is not an absolute right and, in conjunction with other factors, has limitations. Severity, persistence and targeted harassment may cross the expression threshold, but that determination is made on a case-by-case basis.

Laura Fisher, assistant superintendent of personnel services, summed up the tense issue, “Sometimes people can be uncomfortable because of an opinion, but that doesn’t mean it’s bullying…We’re ensuring that while their First Amendment rights are protected, it is just as important to protect other students from bullying, harassment and intimidation.”