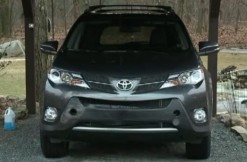 An 81-year-old Pennsylvania woman  rammed her SUV into the getaway car of the pair who just robbed her. Though the two escaped, police used the scuffs on their vehicle to identify them. Nothing special here. Just a story about an elderly person getting acting like an action hero.

William Hayhurst, 34, and Erin Vamatre, 30, allegedly stole Alice Makla’s purse while she sat in the driveway of her home, according to Pocono Mountain Regional Police. (She apparently got on the alleged crooks’ radar after they saw her flashing cash at a local convenience store.)

“One of the fellows reached in and grabbed the purse,” Steve Jabara, Makla’s neighbor, told WNEP. “She was talking to them, the window was open, and they ran with it, and she tried to chase them.”

Chase them? A bit of an understatement. Makla drove her SUV into their car, as one does when robbed. (Tragically, there seems to be no video of this. A moment lost to history.)

They escaped, but police eventually found them in a supermarket parking lot. As mentioned before, the scratches left by the cash made it easier to guess who they were.

“She wasn’t afraid to go after them,” said Jabara. “They had her purse. She had, I guess, some money in there. She was pretty brave actually. She doesn’t think so, but she was.”

Police say Hayhurst and Vamatre admitted to the crime. They are scheduled for a preliminary hearing on February 25.