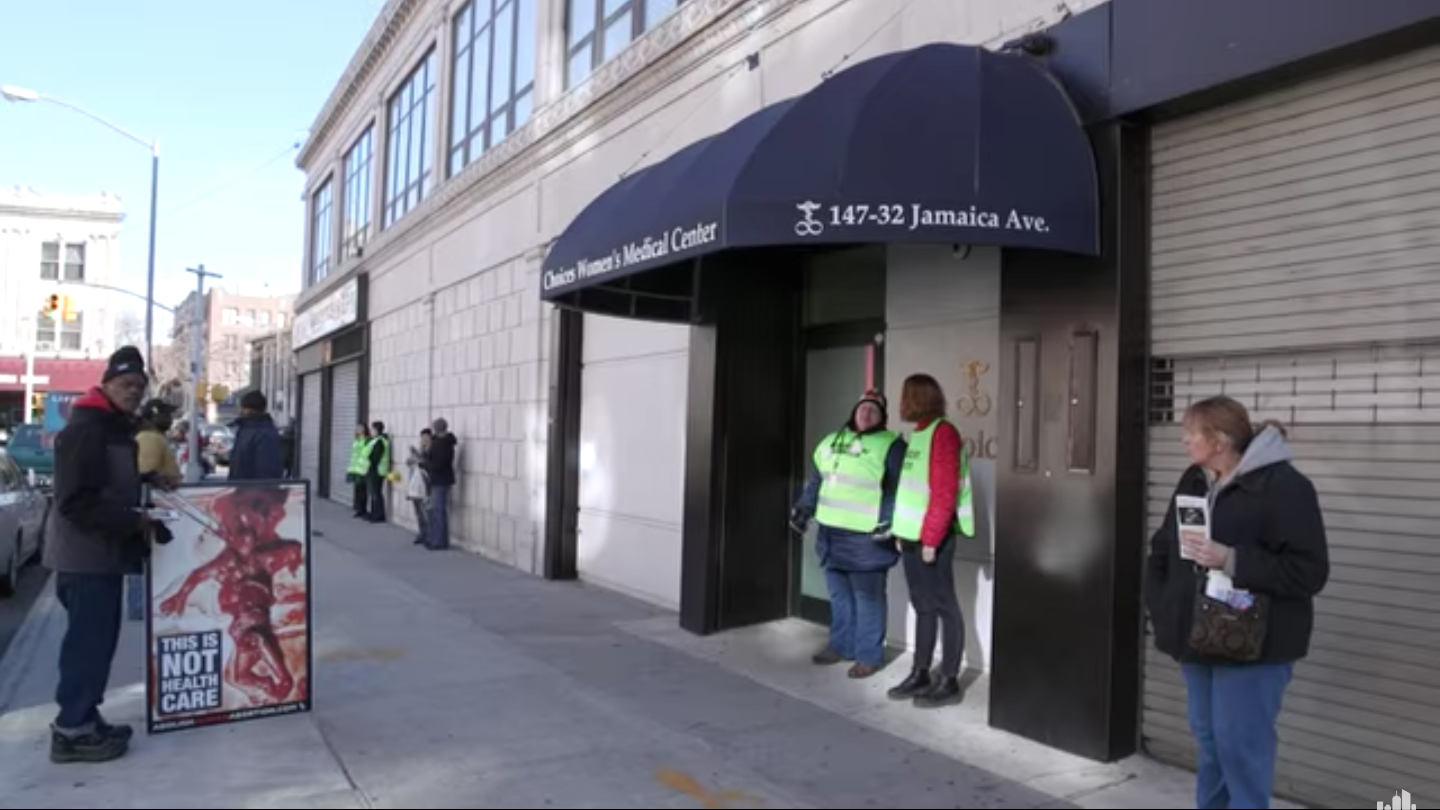 On Friday night, U.S. District Judge Carol Bagley Amon denied the New York State Attorney General’s request for a preliminary injunction against a group of ten anti-abortion activists and members of Brooklyn’s Church at the Rock.

Since 2012, various activists from the church have congregated outside the Choices Women’s Medical Center located in nearby Jamaica, Queens. There, on some Saturday mornings, those activists have clashed with volunteer clinic escorts.

Starting before Choices opens at 7:00 a.m., the anti-abortion protestors set up along the sidewalk leading to the Clinic entrance and proceed to engage in a variety of activities. Some hold large signs that purport to show images of aborted fetuses; others principally preach; still others attempt to hand approaching patients and their companions anti-abortion literature and to engage them in conversation about the morality of their actions. The escorts also arrive early in the morning. They attempt to accompany the patients to the Clinic entrance and to shield them from what the escorts believe is illegal conduct by the protestors.

On June 20, 2017, the New York State Office of the Attorney General filed a lawsuit against 13 named anti-abortion protestors, “seeking declaratory, injunctive, and monetary relief under federal, New York State, and New York City law.” Those actions were based on New York’s Freedom of Access to Clinic Entrances Act, the New York Clinic Access Act and various other statutory provisions. After a fair amount of legal wrangling and backtracking, both sides agreed to style the adversarial proceedings as a preliminary injunction hearing instead of a trial.

Based on the evidence and testimony presented during that hearing–and an additional date of oral argument–Judge Amon ruled decisively in favor of the anti-abortion protestors. That’s because the evidence simply didn’t support the allegations; and because the concomitant testimony was deemed unreliable. The court’s order leaves nothing to doubt.

Judge Amon notes, in relevant part, “At the preliminary injunction hearing, the OAG, in attempting to carry its burden of proof, relied on three primary categories of evidence to establish that the defendants violated federal, state, and city law: (1) videos and photographs, (2) Clinic Escort Recaps and Protestor Experience Questionnaires, and (3) the testimony of [various] witnesses.” Her order continues [emphasis added]:

I place significant weight on the video and photographic evidence, no weight on the Clinic Escort Recaps or Protestor Experience Questionnaires, and limited weight on the OAG witness testimony. The most problematic of the credibility issues discussed below is the tendency for the Clinic Escort Recaps, Protestor Experience Questionnaires, and OAG witness testimony to exaggerate the impropriety of the defendants’ conduct and to omit mitigating circumstances. In this regard, is notable that, despite the availability of hundreds of hours of video evidence, the OAG has not cited a single video that corroborates the witness testimony claiming near-weekly violations. Instead, the video evidence contradicts the escorts’ accounts of protestor conduct on specific occasions.

Barbara UnderwoodChurch at the Rock