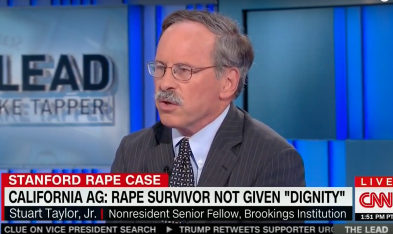 There is no question Santa Clara Judge Aaron Persky is facing increasing backlash after he sentenced former Stanford University swimmer Brock Turner to six months in county jail and three years probation related after he was convicted of three felony sexual assault charges.   Well, attorney Stuart Taylor Jr, a senior fellow at the Brookings Institution. appeared on The Lead with Jake Tapper to provide some balance to this conversation.  Taylor said although the sentence may have been less than what he wanted, the “system worked” and justice was still done in this case.

Taylor first made a point of reminding viewers this was not a “rape” case as so many outlets continue to call it — including CNN on its iOS App — rather it is a sexual assault case.

Next, Taylor explained why he believes the system worked:

On the whole, it would have worked better if he had gotten a two-year sentence, which is what I recommended. I think the victim called for three years. The police did a great job, collected the evidence, arrested the … the bad guy.  The prosecutors did a great job. They put it to a jury. A jury convicted. … The judge presided over the trial well.

“So, you’ve got a lot of things that you don’t get through the campus disciplinary systems, which is what a lot of activists would like to substitute for the criminal justice system,” Taylor said.

An excellent rundown some of the changes to campus disciplinary proceedings led by activists and even the Obama Administration that Taylor is discussing can be read in a previous article written several months ago at LawNewz.com.  The advocated changes include an end to the traditional right to confront one’s accuser, lowering the burden of proof to a mere preponderance of the evidence and ending one’s right to appeal what is essentially an administrative proceeding deciding criminal matters.

Finally, after rejecting Tapper’s attempt to bring race into matter, Taylor took on recent comments from California Attorney General and Democratic California Senate Candidate Kamala Harris that the “victim’s voice was not heard” … and “… she was not given dignity in the process,” according to Reuters.

Taylor rejected the claims, stating, “First of all, I think that’s an odd choice of words. She spoke for 7,000 words in front of the judge and spoke very eloquently. Her voice was certainly heard….”